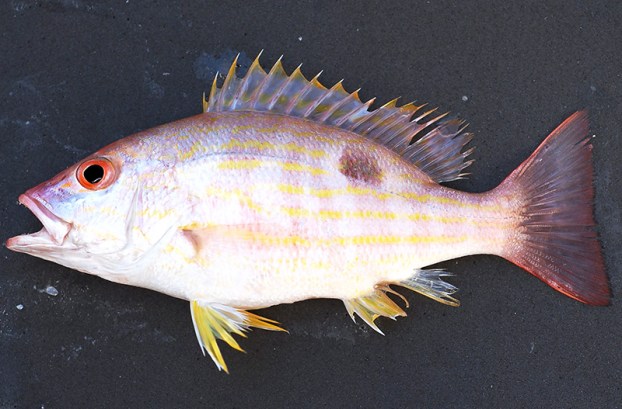 Last week a caller to my radio program asked what kind of snapper was pinkish colored and had a black dot halfway between pectoral and dorsal fins.

The answer was a lane snapper.

These are a fairly common reef fish found around oil rigs, wrecks and of course natural reefs in the Gulf of Mexico.

He caught several of them over the span of a couple of weeks from the bank in Sabine Pass.

This was the first time I have heard of lane snapper caught anywhere other than in the Gulf itself. I have caught one at the nearshore oil rigs but this was definitely unique.

Mangrove snapper (gray snapper) are occasionally caught in Sabine Lake and have been verified as far north as Bessie Heights Marsh.

There were a couple of instances of mangroves caught this year but I think the huge amount of freshwater in the system probably pushed them back a bit which makes the lane snapper catches even more unusual.

On the same program, a reader called and reported catching two alligator garfish in the surf at Sea Rim State Park back in October.

This is only the second time I have heard of garfish at the beach. The first was in 2015 when we ran a photo of Marcus Heflin of Christian Surf Fishing Adventures with a big gar he caught at Sea Rim.

When I was a little boy, my parents bought me a big box full of Texas Parks and Wildlife magazines at a thrift store. One of those magazines had a map of Sea Rim and fishing hot spots marked by species. One of those spots was for gar in the surf.

Interestingly the first time verified gar catches were reported there on my watch was in 2015.

On the freshwater side of things I spoke with an angler who caught a pacu, which is essentially a vegetarian piranha in the Sabine River.

Over the years we have ran photos of two pacu caught in the Sabine. At some point released aquarium pets got in that river system and have reproduced. Pacu grow to impressive sizes but all of these fish have been about the size of a man’s hand.

Last week I had a chance to fish the upper reaches of Cow Bayou and was impressed with the large number of chain pickerel there.

Chain pickerel are small cousins of the northern pike and they can grow to about two and a half feet long. The ones I saw feeding along the surface were only 8-10 inches long but it was really neat to see them in such numbers here in Southeast Texas.

Finally, I had an angler send me a photo of a turtle he caught in Cow Bayou that he had never seen before.

It was a razorback musk turtle.

They are not commonly seen in the area due to their highly aquatic nature and the fact they don’t get much bigger than a box turtle probably helps them go without being noticed as much as red-eared sliders which get much bigger.

These little turtle have a pointed shell and ornate patterns making them one of the most striking reptiles in our region.

Southeast Texas has incredible biodiversity and sometimes all you have to do to encounter it is head out to the water and wet a line.

BEAUMONT — James Anderson should find himself in quite the holiday spirit. He traveled to Arlington on Friday to see... read more