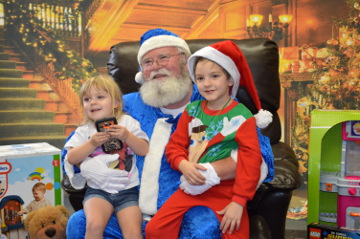 Christmas for more than 400 children will be a bit brighter thanks to Port Arthur Police Blue Santa Program.

Families lined up at the Robert A. “Bob” Bowers Civic Center where inside there were large holiday inflatables, cookies and ice cream, loads of toys and even a blue clad Santa Claus, also known as Mike Barnett, who posed for photos with kids. 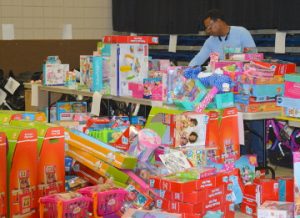 Kim Mitchell was one of the people standing in line on Friday.

“I have a son and a daughter but I’m just getting for my son,” Mitchell said of her 3-year-old son. “We don’t usually celebrate Christmas because we give gifts throughout the year but since my son is only three I decided to sign up.”

Mitchell said this is her first time to seek some assistance during the holidays.

Winston Albrecht brought along his children Deanna, 3, and William, 6. The family first visited with Santa and had a photo taken.

“This is awesome,” Winston Albrecht said of the visit with Santa. “We just moved here six months ago.”

Behind the scenes were local student volunteers such as Antonio Ortiz, 10. 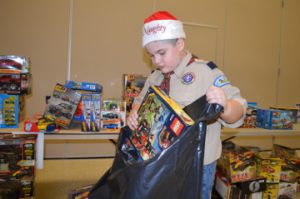 Ortiz, who is a member of the Boy Scout Pack 232 of Nederland, was able to help others while doing service hours for the Scouts.

“It’s a blessing that he is able to do his service hours here,” Tammy Ortiz, his mother, said. “The Blue Santa Program is very important to the community.”

Police officers mingled with families and helped with packing up the toys and bicycles for the kids.

“I always tell people that Blue Santa is more than just gifts for children. This is a year-round program,” Port Arthur Police Officer Mike Hebert said. “During the year we look for needy families whether they lost their children’s clothes to a fire, like recently, or have a special needs child.”

Hebert said the officer’s love taking part in the giving program because it makes them feel good to help.

“It’s a little selfish because we love doing this,” he said. “There’s been a great response from people, they’re humbled, and every year there are four or five grandmothers raising their grandchildren who break down and cry.”

Port Arthur Police Blue Santa is a 501c3 organization whose mission it is to make sure no child in the area goes without for Christmas.

Jaiyden Almendarez stood next to his brand new bicycle with a beaming smile. “I’m happy I got a bike,” Almendarez,... read more