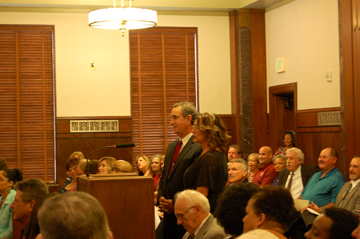 Sheriff Mitch Woods was recognized for retiring aftr 30 years of service at the regular meeting of the Jefferson County Commissioners Court on Monday afternoon. His wife, Corby, looks on. There were 18 retirements recognized at the meeting.

BEAUMONT — The former Al Price Juvenile Correctional Facility on Highway 69 has been vacant for months but there soon may be some new life breathed into the facility.

Two interested parties addressed the Jefferson County Commissioners Court at a workshop on Monday morning. This was a non-action item.

The first to speak were representatives from CCA, or CoreCivic. Brad Wiggins, senior director, site acquisition and development, said he worked in Beaumont 25 years ago when the Federal Bureau of Prisons Correctional Site was built.

The company operates 66 facilities across the country including residential release furloughs. They operate six halfway houses and four state jails in Texas with more than 500 employees.

Al Price would be more of a behind the fence facility, where inmates would receive treatment for substance abuse addictions.

Dan Kaman senior director, partnership relations, said it will be a secure facility and the company is in the preliminary stages.

CoreCivic has spoken with the Texas Department of Criminal Justice.

There is lack of a treatment facility such as this in the area and the Al Price facility fills that need.

Wiggins said the facility is in very good shape, minus some HVAC work. The property condition assessment will take four to six months to process.

Brent Weaver, Precinct 2 commissioner, said the company would have to participate in a bid process.

The Al Price facility is 57 acres with 14 out buildings.

Weaver asked how many inmates would be housed at the facility. Wiggins said they would have to defer to the TDCJ for the exact number. Contracts are active from four to six years.

Hiring for the facility would be done either through the company’s human resources department or a local job fair 90 days prior to opening.

Wiggins said CoreCivic would be part of the community, something they would take very seriously.

“These facilities are important to the holistic approach to healing. We have very few failures in our system. It’s a very good program,” he said.

County Judge Jeff Branick said it was about time the criminal justice system deal with the root causes of recidivism.

Wiggins said they are keenly interested in the Al Price facility and they invited the commissioners to visit their Austin facility that would be most similar to the Beaumont one.

The second to speak was Riley Broussard with Gulf Coast Healthcare of Port Arthur for use of the property. They would like to use the facility to service behavioral health needs for the six surrounding detention facilities.

“The need is there,” Broussard said. “There are thousands of inmates on waiting lists for transfer.”

“We can bring a model to the area to help.”

He added that they’ve done a soft assessment of the facility and there are only a few things needed to bring it back online.

The property would be used in phases and they would grow and expand from there. From the start, however, Gulf Coast would be responsible for the entire facility, he said.

He added that the state hospital in Rusk is overwhelmed.

Weaver asked if they would be residents or inmates. The answer was both.

Weaver asked if the state was looking for a place to house them. Broussard said yes.

Weaver asked how they would be classified. Broussard answered they would be low-risk . Medium-risk inmates could be taken in with additional training.

“Rehabilitation will be a big part and we will provide the best possible services,” Broussard said. “We believe in the proper rehabilitation and monitoring. That would help out a lot with low and medium-risk. We have no contract with TDCJ now.”

“It would start here. Money is no object right now. Our other facility is in Houston.”

“It’s a need that’s been overlooked for years,” he said.