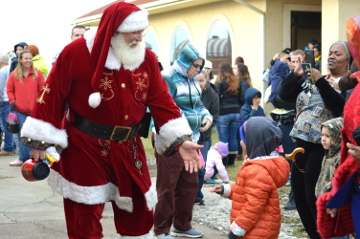 Chilly temperatures didn’t stop the crowds from coming out to see the Kansas City Southern Holiday Express train in Port Arthur on Thursday.

A group of first responders including police, fire and U.S. Coast Guard had a chance to bring their families inside the six-cars of winter wonderland first. 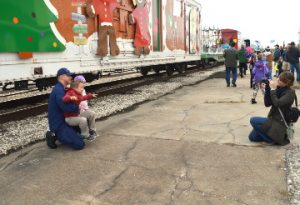 U.S. Coast Guard LTJG Matt Lemanski and his children Leo and Julia pose for a photo next to the KCS Holiday Express train as his wife Jelsea snaps photos on Thursday.
Mary Meaux/The News

U.S. Coast Guard LTJG Matt Lemanski had heard of the train from his unit commander and brought along his wife, Jelsea and children Leo and Julie.

“This is wonderful,” Velez said of both the train and the town. I’ve told my wife how nice it is here and about the museum and how the city is working to revitalize the downtown area.” 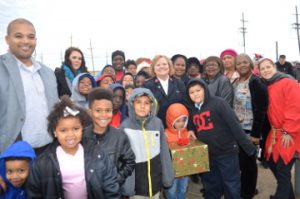 While the “elves,” or KCS volunteers and emplyees prepped the train for the numerous visitors Train Event Manager Grant Elliott presented Salvation Army Maj. Nancy Fuller with Walmart gift cards to be given to the needy.

Fuller, who brought along children from the after-school program and women from a ministry group, took a minute to thank KCS.

“This is a blessing,” Fuller said while holding a stack of envelopes with the gift cards. “I love to see the train come through Port Arthur and KCS couldn’t be more generous.”

Santa Claus took time to stop and greet children in the crowd including Elin Runnels, 2, and Elleah Runnels, 7, as their father, U.S. Coast Guard Chief of Machinery technician T.J. Runnels and wife Katie looked on. 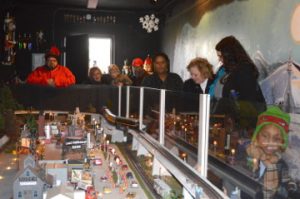 A look inside one of the Holiday Express train cars.
Mary Meaux/The News

The KCS Holiday Express was created in 2001 as volunteers dedicated more than 8,000 hours to transform retired rail cars. Today, these cars feature a smiling tank car named Rudy; a flatcar carrying Santa’s sleigh, reindeer and a miniature village; a gingerbread boxcar; the elves’ workshop; a reindeer stable; and a little red caboose.

KCS employees, vendors and friends provide donations that are given to the local Salvation Army at each scheduled stop, according to the KCS website. 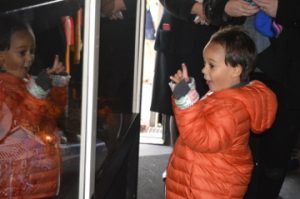 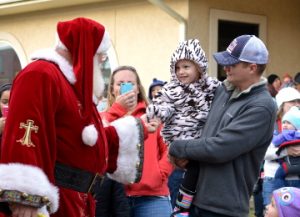 Texas Comptroller Glenn Hegar knows of the importance of the Port of Port Arthur to not only the community but... read more