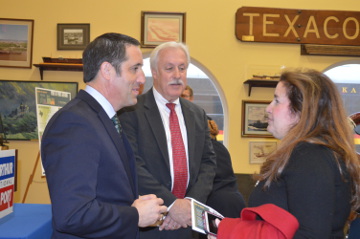 Texas Comptroller Glenn Hegar knows of the importance of the Port of Port Arthur to not only the community but also the state and nation.

“The Port of Port Arthur is one of 10 seaports along our state’s 367-mile Gulf of Mexico coastline,” Hegar said. “With a current channel depth of 40 feet at both the public and larger private terminals, the port can accommodate many types of trade, from large oil tankers to military cargo.”

The Port’s contributions to the Texas economy include an $18.2 billion total trade in 2015, 68,000 of direct and indirect employment and $9.7 billion to the gross domestic product. The Port of Port Arthur is part of the Sabine-Neches Waterway, which recently surpassed the Port of New York and the Port of New Jersey in terms of shipments with more than 129 billion tons, according to Hegar.

In addition, the operations of the Port support an estimated 68,000 jobs and add $9.7 billion to the gross state product.

Port Commissioner Raymond Johnson said it is great to see someone in Hegar’s position come to the Port to see how it functions.

“We educated him and he educated us on the state’s economic position that the Port and the Navigation District’s part of the greatness,” Johnson said of a meeting between Hegar and Port commissioners.

The Panama Canal expansion project, which will help meet the need to accommodate larger ships, is directly tied to the area. In May 2016, Port Arthur voters approved the sale of $89 million in bonds to modernize and expand port facilities. Construction associated with these bonds will begin in 2017 and employ up to 350 construction workers, according to Hegar.

But the Panama expansion needs one more critical piece in order to help the Port — the deepening of the ship channel.

The Channel Improvement Project, to deepen the local waterway to accommodate the larger vessels has passed a number of hurdles including getting approval by the Army Corps of Engineers, the U.S. Senate and U.S House of Representatives and the presidential signature and is waiting funding.

Hegar said he was able to visit with the commissioners and learn directly form them their issues and challenges.

The Good For Texas Tour, Ports Edition will wrap up Dec. 15 in Houston.

Car shot at, no injuries reported

No was one was injured after a car was shot at in the 3200 block of 30th Street early Thursday... read more