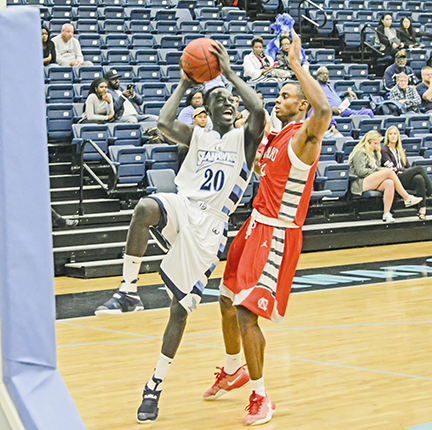 PORT ARTHUR – Lamar State College Port Arthur sprinted out to a double-digit lead early but then fell in a deep hole from which they would not escape as the Seahawks lost 69-59 to Navarro College on Wednesday night at the Carl Parker Center.

“We got too far in the hole,” Seahawks coach Lance Madison said. “We had too many turnovers that led to points for them, they were tougher on the glass than we were. We got up on them early but they regrouped and played a good ballgame to come back and get the win.”

The Seahawks jumped out to an 11-2 lead to start the game behind the inside work of sophomore Petar Radojicic, who finished with his fifth double-double performance of the season with 13 points and 11 rebounds. But after a short back-and-forth offensive tussle, the Bulldogs took off on an 8-0 run that gave them a 16-15 lead with 9:50 left in the half.

“When (guard) John (Comeaux) picked up his second foul and we went ahead and sat him out, our offense got sluggish,” Madison said. Comeaux, who leads the Seahawks in scoring this season, managed 12 points and 7 rebounds by the end of the night, but scored just six points in the first 20 minutes, four of those coming from the free throw line.

The Hawks fought back, retaking the lead, 20-18, on a basket by Akol Deng, with 7:55 left until intermission. That would be the last basket for nearly seven minutes as the Bulldogs went on a 16-0 run that put them out front 34-22 with 1:03 left. Navarro took a 36-25 lead into the break, scoring 11 points off turnovers and 10 points off second-chance opportunities in the first half.

The Seahawks managed to cut the lead to nine within the first two minutes of the second half but couldn’t hold off the Bulldogs as they went on a 16-2 run to take their biggest lead of the game at 23 points, 54-31, with 11:38 left in the game.

But even as it appeared the Hawks were done for the night, they put their heads down and went to work, running off a 21-4 jaunt that would bring LSCPA back to within six at 58-52 with four minutes left to play.

“I knew we were never out of it,” Madison said. “That run showed the character of this team and what they are capable of doing when their backs are against the wall.”

Chase Rutledge, who finished with 12 points, hit three 3-pointers to keep the Hawks’ hopes alive, while Comeaux got back in the fray, driving to the glass for critical late-game baskets.

In the end, though, the early deficit was just too much to overcome and the Bulldogs walked out with a 10-point win to end the pre-holiday play for both teams.

“We’re a young team,” Madison said. “We returned two players from last year and one of those sat out with a medical redshirt. But I like this team. We’re going to continue to get better and we’re going to build some momentum as we move through the season.”