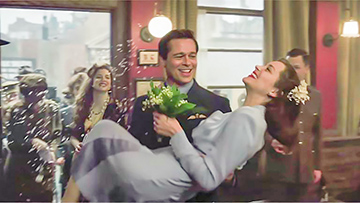 2 and a half stars

The World War II drama “Allied,” has the look and the feel of an old classic Hollywood romance. Starring two incredibly photogenic movie stars and set against visually stunning backdrops, the film easily sweeps you away into a bygone era of moviemaking.

Alas, this is all a shallow surface meant to conceal the fact that underneath the beautifully polished exterior, lies a bloodless story that fails to do any more than simply be a collection of pretty images.

Don’t blame the story, which offers plenty of potential for dramatic fun. Brad Pitt stars as a Canadian intelligence officer who parachutes into Morocco at the height of World War II. He meets up with a French resistance fighter, played by Marion Cotillard. They are posing as a married couple as they set out to assassinate a German officer.

Their married cover story leads to actual romance, so the story whisks them away to London, where the two agents are married and start their family. The central plot twist kicks in when the new wife is suspected of being a double agent and the husband is ordered to assassinate the woman that he has come to love.

At least I think he loves her.

There’s simply not a lot of onscreen chemistry between Pitt and Cotillard. Pitt spends the movie posing in his impeccably tailored suits, looking very much like a man in love, or alternatively, a man who suspects the worst, but seldom anywhere in between these two extreme opposite emotional states.

Cotillard has similar issues, as she’s supposed to play the beautiful enigma without tipping her hand before the film’s finale. I think that she’s pretty good here, especially given the difficulties of working within a story where the plot mechanics are deliberately designed to keep her character at arm’s length.

Director Robert Zemeckis has always been a filmmaker who favors technical wizardry at the expense of full blooded characters. He has always been smart enough to cast actors who could do the emotional storytelling while he concentrated on his filmmaking tricks. That simply didn’t happen in “Allied.”

Which is not to say that the film is a total disaster, and it certainly has plenty of moments of cinematic appeal. The gorgeous cinematography and computer generated landscapes are beautiful, particularly with Pitt and Cotillard posing in the foreground. But audiences who are looking to be swept away by a grand, romantic story will be left wanting.

“Allied” may look and feel like an old Hollywood classic, but there’s very little that resonates underneath the film’s beautiful exterior.

Disney has another monster hit on its hands in the form of “Moana,” a Polynesian-themed animated adventure that is sure... read more