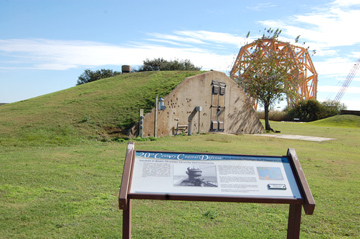 Sabine Pass was a natural spot for defense

SABINE PASS — Sabine Pass played a strategic role in protecting the Confederacy from the Union in Southeast Texas during the Civil War.

Several decades later it played a strategic role again in World War II. A historical marker and some plaques at the Sabine Pass Battleground Park commemorates the coastal defense of that era.

The Japanese raid on Pearl Harbor on Dec. 7, 1941, abruptly brought the United States into World War II but earlier, unsettling global activities by Japanese and German Axis forces had given the United States cause to strengthen its border defenses.

The Southern Defense Command was established in March of 1941 and by December measure had been taken to place combat teams around the Gulf of Mexico.

When a German U-boat was spotted 15 miles east of the Corpus Christi channel on January 26, 1942, the potential damage to shipping spurred action to further improve defenses along the Texas coast.

In January 1942, a field artillery battery was deployed to Sabine Pass to guard the channel to the harbor of Port Arthur. In April, an Army Battalion arrived on the Texas coast and Sabine Pass received a pair of 155 mm guns.

On July 30, 1942, a German U-boat in the Gulf of Mexico torpedoed and sank the freighter SS Robert E. Lee, killing 25 of the 407 people on board. The U.S. Navy patrol craft PC-566 sighted and pursued the U-boat, inflicting lethal damage with depth charges.

On August 1, 1942, a routine anti-submarine patrol spotted a surfaced submarine, which they attacked two days afterward, 130 miles away from the original location.

During World War II, a total of 24 U-boast attacked ships in the Gulf of Mexico, sinking 56 and damaging 14.

The natural topography and the valuable petroleum exports of Sabine Pass made it one of the primary points of defense along the Gulf Coast.

Support facilities for the gun placements at Sabine Pass included a plotting room and splinter-proof magazines. These were used to store fuses, projectiles and powder charges for the defense guns.

Due to low elevation and exposure to high tides and storms, these storage facilities were built of timber on continuous concrete footings with an earth cover several feet thick.

At the time, the searchlights might have been the most visible element of the HECP.

The searchlights consisted of a pair of 60-inch lights mounted on steel towers. In addition, four portable 18-inch searchlights illuminated the channel and functioned as beach defense lights.

The HECP also contained an operations building, a mess hall, and a motor shed. Housing for enlisted personnel consisted of 30 prefabricated six-man huts. Most construction was completed by October 1943.

By then the Allies has better control of the Atlantic and German U-boats no longer posed a serious threat to coastal installations and strategic industries along the Gulf Coast.

Shipping could be better protected by aerial patrols.

On April 22, 1944, the sector Joint Planning Committee determined fortifications at Sabine Pass were no longer needed and recommended the HECP be closed and the coastal batteries and troops withdrawn.

The Sabine Pass post was decommissioned and the guns removed in July 1944.

The text to the 2004 historical marker reads as the following:

The natural coastal cut of Sabine Pass has long been an important military strategic point, as evidenced by the battle that took place here during the Civil War. It was no less significant in World War II, when it became one of the primary points of defense along the United States Gulf Coast.

In 1941, the U.S. Navy established a Harbor Entrance Control Post (HECP) at the pass to provide defenses against potential enemy activity in the area. Soon after, the U.S. Army installed artillery emplacements at Texas Point (3.62 mi. S) that included two 155mm Howitzer guns on Panama mounts, as well as four munitions magazines at this site. The Army’s lease of land at Sabine Pass resulted in the location of a temporary harbor defense unit manned by the 256th Coastal Artillery Regiment at Texas Point.

Other elements of the defense system included two base end stations, an observation tower, signal stations, large coastal searchlights, a battery commander post and part of the Coast Guard lifeboat station, originally established in the 1870s as part of the U.S. life-saving service. The munitions magazines also held other ordnance for area installations.

Working together, the HECP and the Army post utilized these storage magazines to service the war effort. The defense system remained in full operation until 1944, when the naval section base at Sabine Pass was decommissioned and patrols were discontinued. A caretaker force remained for some time, but the Army declared the post surplus and abandoned it in January 1945.

Today, these munitions magazines serve as evidence of military preparedness and the strategic value of Sabine Pass during World War II.

CO explains how the Coast Guard is set up

Members of The Rotary Club of Port Arthur probably came away with a better understanding of how the United States... read more