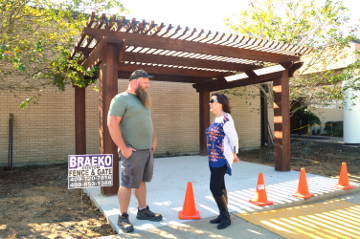 PORT NECHES — There are some changes going on to the outside of the Effie and Wilton Hebert Library in Port Neches.

Patrons and motorists along Merriman Street have already noticed the addition of a 16-foot by 16-foot pergola, or shade arbor, not far from the entrance of the library.

But there are more upgrades in store for the front of the library, Lisa Wappler, library assistant, said.

The library received a $12,000 grant from the Wilton and Effie Hebert Foundation for the pergola and landscaping and another $12,000 to perform other projects out of the same grant such as a photocopier and networking upgrades.

Library officials have tapped Braeko Inc. for the construction of the pergola.

“The pergola doesn’t offer 100 percent shade but cuts out some of the light,” Aaron Lunceford said.

Lunceford said the project is not complete yet and that railings and benches will be added to the inside. Then he will come back and stain the concrete for a finishing touch.

In addition to the pergola there will also be bicycle racks added nearer to the front door and landscaping.

During the design phase library officials gave Lunceford ideas for what they wanted and he then brought some of his own, she said.

“I definitely think this (pergola) will get a lot of use,” she said.

“I believe people will come in and want to sit out here,” he said. “I’m glad to have the opportunity to put our craftsmanship on view and being able to do something for the city I’m from and where my business is located.”

The project will be completed by spring.

The Effie and Wilton Hebert Library is located at 2025 Merriman St., Port Neches.

PORT NECHES — Jefferson County Court at Law No. 1 Judge Gerald Eddins has ruled in favor of the city... read more