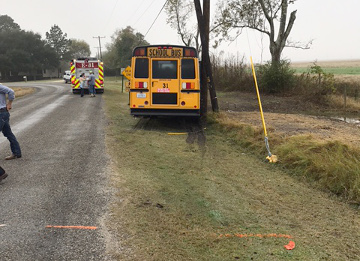 A bus driver for Hardin-Jefferson Independent School District was cited for unsafe speed after a crash Tuesday morning. Courtesy photo

JEFFERSON COUNTY — A bus driver for Hardin-Jefferson Independent School District was cited for unsafe speed after a crash Tuesday morning.

Texas Department of Public Safety received the call of the crash around 7:15 a.m. on Old Sour Lake Road in Jefferson County.

The driver attempted to make a right turn onto Patna Drive from Old Sour Lake Road at an unsafe speed and lost control of the bus. The bus traveled off the roadway and hit a telephone pole, according to a press release from DPS Sgt. Stephanie Davis.

At the time of the crash there were four children ranging in age from 9 to 14 on the bus in addition to the bus driver.

There were no reported injuries however all occupants were checked out by emergency personnel at the scene.

The driver of the school bus was issued a traffic citation for unsafe speed.

Tyler Beckham, grandson of Angie Batchelor who works in the maintenance department for Jefferson County, lit the Christmas tree in... read more