GROVES — Bond is set at $100,000 for a Port Arthur man suspected of several burglaries and aggravated robberies at two Groves apartment complexes.

The suspect, Devonte Chenten, was arrested on a warrant for aggravated robbery on Monday and Judge Larry Gist set the bond, according to a press release from Groves Police Department.

The burglaries and robberies occurred over the past several weeks at Amber Park Apartments and Beverly Place Apartments in Groves.

Groves police is asking that persons who may have been a victim of a burglary or robbery at the apartments and who have not yet made a repot to contact the department at 962-0244. 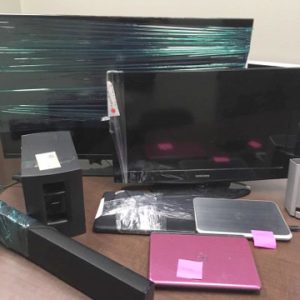 Recovered items believed to have been stolen during robberies and burglaries in Groves.
Photo courtesy Groves Police Department

The city moved a little bit closer in possibly annexing some industrial properties in their Extra Territorial Jurisdiction. The Port... read more