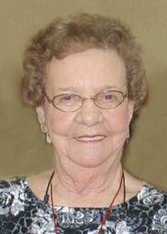 Margie Mary LeBlanc Perkins, 88, formerly of Port Arthur, Texas, passed away peacefully Tuesday, November 15, 2016, with her family and friends by her side in Tyler.

She was born July 19, 1928 in Arnaudville, Louisiana to Henry and Agnes LeBlanc. Her family moved from Arnaudville when she was a child and Mrs. Perkins grew up in Port Arthur, Texas.

Shortly after graduating high school in Port Arthur, Mrs. Perkins started working for Texaco. There she met the love of her life, Ottis Perkins, while working at the Texaco packaging division. They married on October 1, 1947 and celebrated 68 years together as husband and wife.

Mrs. Perkins retired from Texaco where she was employed for 37 years.

Mrs. Perkins’ Catholic faith was a foundation of her character. She was a member of St. Joseph Catholic Church in Port Arthur, Texas. She served as a member of the Altar Society and Bereavement Committee. When she moved to Tyler, she was instrumental in establishing Catholic masses at Atria Willow Park Assisted Living.

Mrs. Perkins had the most generous and loving heart and touched many lives with her presence. She enjoyed cooking and prepared special dishes for friends. Gumbo was always on the menu when she cooked for the Knights of Columbus bingo events in Port Arthur. Later in life, she served five years as a Resident Ambassador at the Atria Willow Park Assisted Living in Tyler.

In her leisure, Mrs. Perkins enjoyed playing bingo and dominoes. She also enjoyed spending time with friends and family.

She leaves to cherish her memory one brother, Leland LeBlanc and his wife Joyce of Jacksonville; nieces, Angela Duitch and husband Delton and children of Arp and Loretta Foster and husband Joe and children of College Station; nephew, Michael LeBlanc and wife Jennifer and children of Richland Hills; granddaughter-in-law, Darcie Long; and three great grandsons of Overton. She is also survived by a host of loving and long-time relatives and friends.

Her family would like to thank the staff at Hospice of East Texas, the nursing facilities that helped care for her during the past several years, and priests and Eucharistic ministers who ministered to her spiritually.

A memorial service to honor her life will be held at a later date.