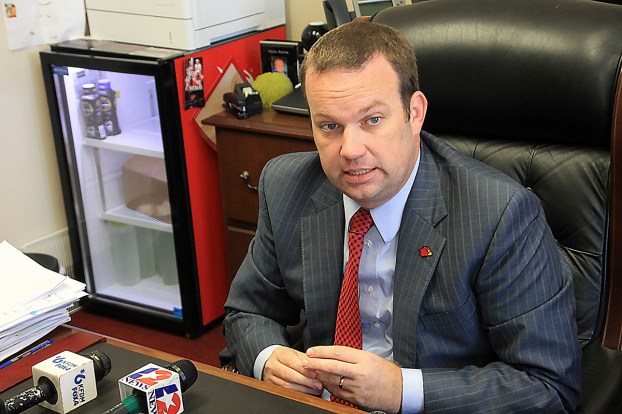 BEAUMONT — Lamar athletic director Jason Henderson wouldn’t say that it was solely Ray Woodard’s 34-46 record — or identify a final straw — that cost him his job as the Cardinals’ head football coach after seven years.

“I don’t think there was a final straw,” he said in his office Monday afternoon after Woodard held his own news conference announcing his firing. “I think it’s just looking at the conglomeration of the total work to see where we need to be.”

Henderson terminated Woodard’s job two days after Lamar suffered a 41-10 loss at McNeese State to finish on a five-game losing streak. Lamar finished 3-8, its worst overall record since Woodard helped relaunch the program, and 3-6 in the Southland Conference.

The defeat does come at a cost to the university. Woodard, who was paid $175,000 annually under his contract updated in December 2014, is owed $100,000, according to the contract accessed through hkm.com.

Henderson felt, going into this season, Lamar was in good position with Woodard to improve from last season’s 5-6 record and become a contender in the Southland Conference, where Lamar has not finished higher than a third-place tie in 2014. The Cards finished ninth in the 11-team football league, enduring injuries to several key players along the way.

“It was just one of those things where things did not happen our way,” Henderson said. “At the end of the year, when we look at everything and evaluate it, it was time to go in a different direction.”

The process of removing Woodard did not begin before the McNeese State game, according to Henderson, who stressed he evaluated the entire season.

He said Lamar’s poor home attendance was not a deciding factor. Lamar did not reach 10,000 fans for a single home game this season and dipped to a low of 5,566 on Nov. 12 against Incarnate Word — a one-win team who beat Lamar 35-28.

A timetable for hiring Woodard’s success has not been established, Henderson said, but he thinks he’ll draw a large pool of candidates, adding he had not drawn interest to his knowledge as of 3:30 p.m. Monday. He does not want to rush his decision, however.

“We want to make sure we make a good decision,” he said.

All of Woodard’s assistant coaches are still on staff and will have an opportunity to interview with the next head coach, the athletic director added. None of the assistants are under contract, said Woodard, who was allotted $584,000 to employ eight assistants and a director of operations. Woodard added his first question after learning of his termination was about the future of his assistants.

“That’s the toughest part of this,” Woodard said. “I have a contract, and I think it’s pretty much laid out what I asked to have happen if they terminate me, but our assistant coaches do not have contracts, and we’re kind of at the mercy of the school. I would pray that Lamar University do right by these guys and give them enough pay and security in time for them to go get another job.”

Henderson’s goal for the next head coach is to help Lamar compete for Southland championships. Lamar last won a conference title in 1971.

“We don’t want to take second place to anybody or any team that we do,” he said. “We want to compete year in, year out for conference championships.”

No sweat: Another fast start puts Titans in regional semifinals