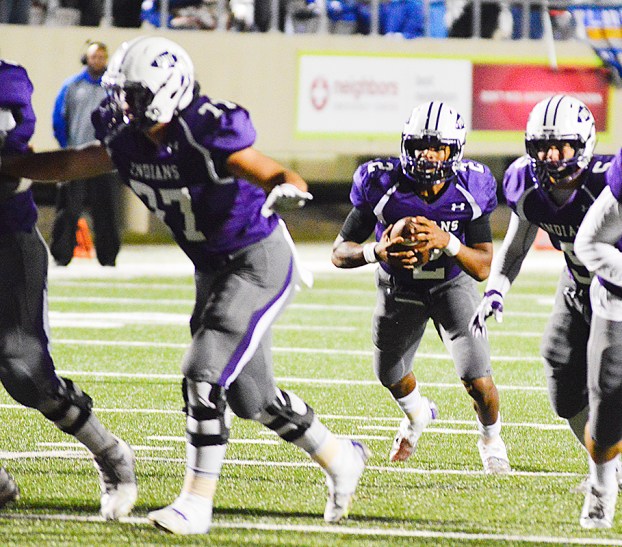 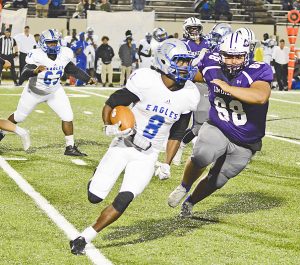 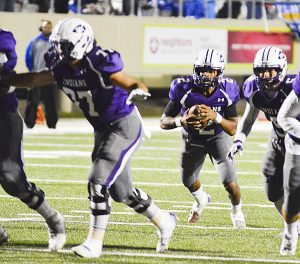 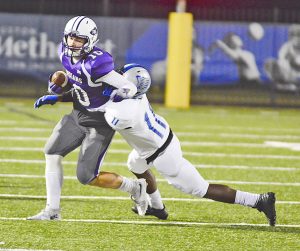 **CORRECTS the round of the playoffs PNG has advanced to**

BAYTOWN — What can’t Roschon Johnson do?

For the third week in a row, the Port Neches-Groves sophomore quarterback rushed for more than 200 yards. The last two games have come in his first UIL playoff appearance.

Johnson rushed for 265 yards on 29 carries and threw for three touchdowns Friday in leading the Indians to a 28-14 win over Fort Bend Willowridge in the area round of the 5A Division II playoffs.

PNG (11-1) has won two playoff games for the first time since 2010 and will take on either College Station or Magnolia — who play at 1 p.m. today in Conroe — in the Region III semifinals.

“Our coaches were just talking about it: It’s only been done twice ever since any of us were born,” senior defensive back Logan LeJeune said. “Just getting there is an unbelievable feeling.”

Many of the players would have been born in or around 1999, the last time PNG reached a state championship game.

Johnson also had 11 of 17 passes for 137 yards and three touchdowns. But he wasn’t the only young guy playing big for PNG.

Freshman Gavin Deslatte made a memorable varsity debut with 108 yards a touchdown on 12 carries. His long of 31 yards went for the insurance score with 6:51 remaining.

Faircloth said he made the decision Sunday to move Deslatte up to the varsity.

“After last week, I thought we needed a little help at that position,” the coach said. “He had a great year. We have some

confidence in him, and his teammates do, too. Tonight, he showed what we can do.”

Willowridge finished its season 7-5, looking for another stunning victory in its first playoff appearance in seven years. The Eagles came from 21-0 down to eliminate Houston Waltrip 28-24 last week.

They led PNG twice and rode the arm of their senior quarterback, Kealton Goffney. A usual run-and-pass threat, Goffney threw for 153 yards on 9-of-17 passing but was held to 41 yards on 15 totes.

Johnson’s longest carries went for 44, 30 and 28 yards. The longest was part of a four-play, 91-yard series early in the fourth quarter capped by Deslatte’s touchdown run.

His 30-yard gain opened the final drive of the first half, but it ended with a deflection and interception by David Anderson.

Johnson completed an 11-yard touchdown pass to Dylan McGough early in the second quarter. McGough had eight catches for 71 yards, continuing his preseason onslaught with four TDs in the past two games.

“The coaches, they see us working,” Johnson said. “They call the plays, and I just execute them the best I can.”

Willowridge had plenty of momentum early and scored on its opening possession. Wideout Joe Johnson made a 17-yard carry for the opening score, but the extra point failed.

A bad snap resulted in an Eagles recovery two plays into PNG’s first series, and Willowridge matriculated 36 yards to the Indians’ 5 in four plays. Kealton Goffney, the Eagles’ run-pass threat, overthrew a wide-open Chris Shaw on third down and threw incomplete again under duress on fourth down.

That started the Indians’ 14-play, 95-yard drive for their first score.

Preston Riggs and Riley Andrews had TD catches of 34 and 22 yards, respectively, in the second half.

Tickets for PNG’s regional quarterfinal game will be sold from 8 a.m.-4 p.m. Monday at the PNG stadium. It will be the only day to purchase tickets.

Ticket prices are not yet available.

Home away from home: Indians make third visit to Baytown this year

PORT NECHES — Stallworth Stadium in Baytown is getting to be a second home to Port Neches-Groves football. “You know,... read more