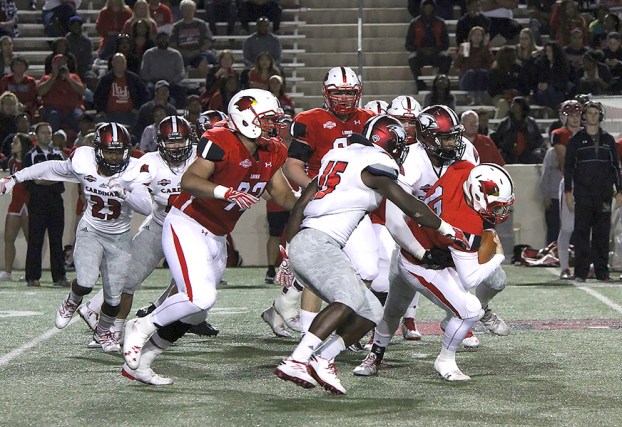 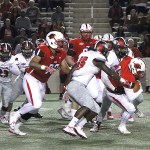 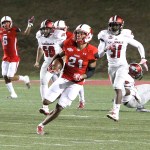 Lamar return man Brendan Langley (21) blows by the Incarnate Word punt team on his way to a 90-yard punt return for a touchdown in the second half of Saturday’s game in Beaumont. (Tommy Mann Jr./Special to The News) 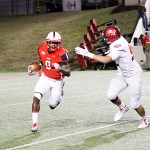 BEAUMONT — Lamar lost its fourth consecutive game Saturday night, and only 5,566 in Provost Umphrey Stadium cared to witness it.

After a first half when nobody scored for all but the first 71 seconds, Incarnate Word closed Lamar’s home schedule with a 35-28 victory. The host Cardinals (3-7, 3-5 Southland) must win at McNeese State next Saturday to avoid the fewest wins in a season since restarting the football program in 2010.

This latest defeat overshadowed a two-touchdown effort by senior Brendan Langley, both on punt returns. Following UIW’s first possession of the second half, Langley returned a punt 90 yards to give Lamar a 14-7 lead, its first since Zae Giles took back the opening kickoff 98 yards for a score.

Lamar broke another tie with 10:08 left with a more entertaining return by Langley. He fielded the punt at his own 25, ran back to his own 10 and took off down the UIW sideline for a score.

UIW (2-8, 2-6) scored on its next two possessions to retake the lead. Jordan Hicks hauled in a first-down catch on fourth-and-12 to the Lamar 12, leading to a 9-yard TD rush for Dorland Fields.

Fields gave the visiting Cardinals the winning score on a 15-yard carry with 2:48 remaining.

Lamar quarterback Adam Morse, who completed 25 of 44 with an interception for 162 yards, could not equalize the score on his final two drives. Blake Klumpp sacked him on the run and forced a fumble with 1:30 left, but the Cardinals got the ball back 20 seconds later.

Morse, a 2016 Port Neches-Groves graduate making only his second start, completed his next two passes to Giles for 17 yards and Michael Handy for 5, but threw incomplete the next two plays and was sacked by Alex Jenkins and Klumpp for a 5-yard loss back to his own 46 with 40 seconds left.

Lamar and Incarnate Word took 52 minutes to compete the first quarter, and all of Lamar’s offensive series in the first half ended in punts. UIW punted each time except its first drive, when Edwards made a highlight reel-worthy 65-yard run-and-catch for the tying TD. He broke a would-be tackler when it appeared he was down, got up and beat the Lamar secondary.

Aside from the punts, the first quarter was lengthened by two video reviews. The first confirmed that Edwards was never down. The second confirmed a targeting foul against UIW safety Adrian Norwood on a dropped Marcus Daggs reception. Norwood was automatically ejected from the game. On the ensuing punt, UIW safety Chris Thomas was disqualified after committing an illegal block and unsportsmanlike conduct (knocking down a player on a dead ball).

The host Cards executed trickery earlier in the quarter on a fourth-and-3 when punter/kicker Juan Carranco connected with a wide-open Jordan Jones for 31 yards to the UIW 25. But Lamar would turn the ball over on downs.

A muffed punt toward end of the period gave Lamar a big break. Morse capitalized with a 26-yard strike to DeWan Thompson for the offensive unit’s only score.

Trent Brittain threw for 273 yards and two touchdowns, but completed only 14 of 33 and was sacked three times. Lamar’s rushing game was held to just 61 yards; freshman Austin Krautz of Nederland ran 12 times for a team-high 12 yards.

**CORRECTS the identity of one of the PNG players in the game-winning sack** BEAUMONT — Time was running out on... read more