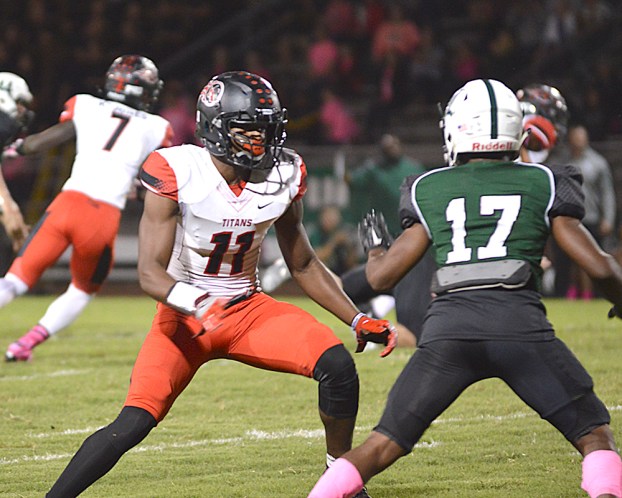 Rickey Thomas of Memorial has proven to be an excellent run blocker as well as a receiver. (Gabriel Pruett/The News)

The type of season junior running back Elijah Hines has played so far is no secret in District 22-5A. He’s rushed for more than 1,200 yards and 17 touchdowns — 303 and five of which came against Port Neches-Groves.

That game played a large part in putting Memorial (8-0, 7-0 in 22-5A) in position to make school history and win its first outright district championship. So have the Titans’ wide receivers.

Four of them rank among the top 10 in the district in receiving yards, but coach Kenny Harrison say the receivers are also aggressive in the running game as well.

“That’s big,” he said after Tuesday’s practice. “Anytime you have receivers who are effective in the run game, you’re going to have an opportunity to be successful.”

Receivers play their part in the run, whether it’s by blocking upfield or churning out more yards on reverses and inside handoffs. The Titans are among the area’s best on jet sweeps, which count as passes if the quarterback pitches the ball forward to a receiver that’s running parallel to the offensive line.

In the regular pass, seniors De’Andre Angelle, Adrian Williams and Rickey Thomas and junior Keitha Jones have proven excellent targets for quarterback Kadon Harrison, combining for 17 of his 19 touchdowns.

“It’s special to us,” Thomas said. “We’ve worked all summer, all off-season for it through two-a-days.”

Angelle has organized another solid receiving year with 569 yards and nine touchdowns to lead the quartet, and Jones (332 yards, two TDs) has been strong in his second year to start. But Williams (289 yards, three TDs) and Thomas (212 yards, three TDs) have risen to the challenge as well.

“It’s been a progress like practice and everything and getting the timing down with our quarterback and our O-line blocking, giving us a chance to catch the ball, the quarterback getting the ball to us,” Williams said. “It’s been good.”

Hines had a very productive outing in Memorial Stadium last Friday against Baytown Lee. Three of his four carries went for touchdowns, and he finished with 105 yards rushing.

Angelle, Williams, Jones and Thomas accounted for seven of Kadon Harrison’s eight completions on 11 attempts. James Francis made the other catch.

“It’s very special, knowing that if we can’t complete any passes, we can hand the ball off and get a couple of yards at any given time, whether we’re blocking or not,” Williams said. “So, that feels good to know we have backup, actually.”

All that stands in Memorial’s way of history is Vidor (7-2, 6-1), a team known for its own rushing exploits. The Titans’ receivers are looking forward to turning in another big game to have the district all to themselves, whether they’re blocking, catching or running.

“It all starts in practice,” Williams said. “If you don’t practice good, you’re not going to play good. We transition everything from the practice field and just execute. Really, the running game has opened up everything for us.”

Said Thomas: “If you stop one thing, we can go to another thing.”

Jamaal Charles may have to wait until Week 17 to play another NFL game. The 2005 Port Arthur Memorial graduate... read more