Political flier containing city logo may be in violation of law 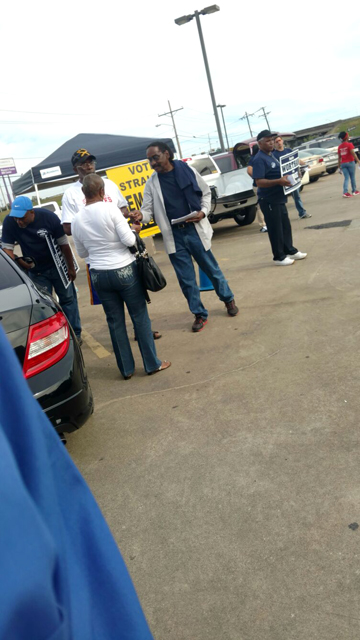 Willie "Bae" Lewis Jr., District 5 Port Arthur city councilman, was seen handing out fliers with the city logo attached at the bottom of the flier that could be in violation under the Texas Ethics Commission.

Some residents say a Port Arthur city councilman is passing out fliers that could be in violation under the Texas Ethics Commission.

Willie “Bae” Lewis Jr., District 5 councilman, has been handing out fliers at the Port Arthur Public Library during early voting encouraging voters to vote no on a city charter change proposition to eliminate Districts 5 and 6 from the Port Arthur City Council.

The fliers have the city logo attached at the bottom, which may violate provisions of the law regulating political advertising.

City Attorney Val Tizeno said that would be a question for the Texas Ethics Commission to answer if he’s in violation of the law.

“They make those kinds of determinations. Their jurisdiction is political advertising. Any complaints should go to them,” she said.

Lewis said the city logo on the fliers are from his city council business card and the flier is an official city publication.

Natalia Luna Ashley, executive director of the Texas Ethics Commission, said her office cannot confirm or deny a complaint has been filed with them over this flier.

She added though, if a complaint has been filed it will become public knowledge on their website as the process continues. Those results, however, will take time as an investigation is ongoing.

An officer or employee of a political subdivision may not knowingly spend or authorize the spending of public funds for political advertising.

A person in violation of this Subsection commits an offense. An offense under this section is a Class A misdemeanor.

A person commits an offense if, with intent to injure a candidate or influence the result of an election, the person knowingly represents in a campaign communication that the communication emanates from a source other than its true source.

An officer or employee of a political subdivision may not use letterhead that is created by city staff or with city resources, and that contains the city’s logo and slogan that were designed with city funds, to write and distribute political advertising.

“City council member use their cell phones to make personal calls that are paid for by the taxpayers.”

“The ethics commission can address this. My conscience is very clear. I’m informing the citizens. I can give out information. If anyone has questions, my contact information is on my card and they can call me,” Lewis said.