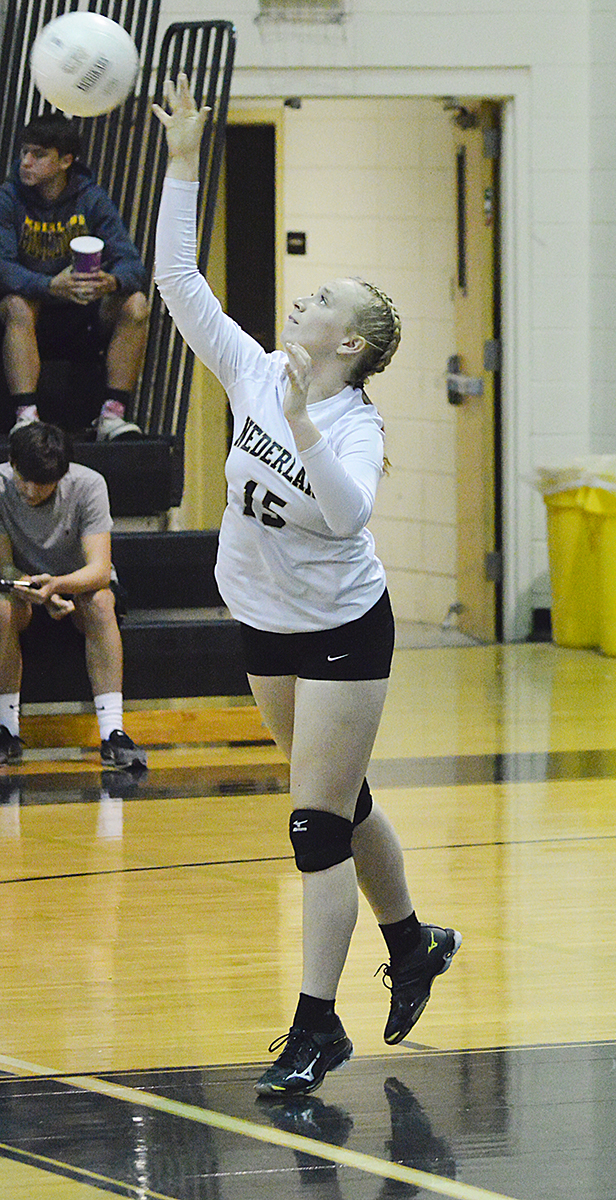 NEDERLAND — First the Nederland Bulldogs got to celebrate Tuesday. About an hour later, it was the Port Neches-Groves Rock-A-Noos’ turn.

The two Mid-County rivals each swept its opponent Tuesday to earn a share of the District 22-5A volleyball championship. Both teams finished the regular season with 13-1 district records.

Nederland defeated Port Arthur Memorial 25-20, 25-14 and 25-13.  The Bulldogs did not get off to a fast start in the first set, and coach Kristin Lemoine had a message for her team.

The Bulldogs found themselves down four twice to Memorial at 10-6 and 14-10.

Nederland’s Amanda Longlet put the Bulldogs on top 16-15 with three straight service points before Memorial jumped back ahead at 18-16.

Kennedy Kieschnick’s four straight points then gave Nederland the lead for good at 21-18.

The Bulldogs then got eight straight service points from Darcie Jones in the second set to jump out to a commanding 18-8 lead. Nederland went on to win that set.

Memorial found itself in a 0-6 hole in the final set before battling back to tie the set at 7-7.  Jones again had a long run of service points to put the Bulldogs ahead at 20-11. Nederland’s Caly Holyfield finished the match off with four straight service points.

Lemoine said she was proud of her time for winning a piece of the Bulldogs’ first district title in volleyball since 2006.

“This team believed in themselves,” Lemoine said. “They didn’t look at this year as a rebuilding year. They knew they were a talented team and went out and accomplished its goal.”

“The competitors we have here at PNG, it is a great feeling,” PNG coach Barbara Comeaux said. “Our seniors have really led this team this year and we had some younger players step up. I am very proud of them. We are not through yet. This team will always have a chance and that is really all you want, a chance.”

Hannah Jones led PNG with 16 service points to go with nine kills. Kailey Oliver and Bayja Newby each finished with 12 service points while Kaitlyn Gil had nine and Libbie LeJeune had eight.

Rachel Hammersmith had 17 assists, Baylee Priddy had 12 assists, LeJeune and Gil each had eight digs, and Newby had six.

Gil led the Rock-A-Noos with 12 kills while Cheyanne Orozco and LeJeune each had eight.

PNG and Nederland coaches will meet today morning to decide when and where to play a tiebreaker for the No. 1 seed in the district.

GIRLS BASKETBALL: Titans reloading in move to 5A