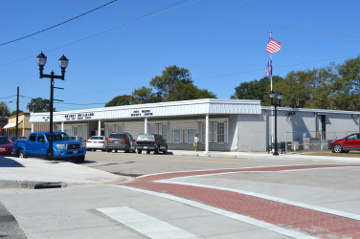 PORT NECHES — Patrons coming out to the Second Annual Art on the Avenue in Port Neches on Saturday will be greeted by a new, vintage look.

New sidewalks, brick-like crosswalks, ornamental lighting and benches are already in place and planters will be added soon as part of the Port Neches Avenue Enhancement Project.

Mike Lisotta stood outside his business, Mike’s Old Fashioned Soda Fountain, on the avenue and smiled.

“I’m thrilled with everything added,” Lisotta said. “It adds so much charm and a vintage look.”

Esther Macha, former owner of The Cherry Tree florist and owner of the Macha building, grabbed a light lunch at Mike’s on Friday. She’s also excited about the upgrades and said they add to the charm of the avenue.

Debbie Plaia, executive director of the Port Neches Chamber of Commerce, has watched the project unfold since late April.

“We are excited the Art Walk will be the first event along the avenue since the work has been completed,” Plaia said.

Businesses along Port Neches Avenue likely had a tough time as the roadwork was done and traffic diverted for the summer months. But that is over now and traffic is back to its normal flow.

Plaia said she has noticed a positive reaction from folks visiting the avenue shops and noticing the enhancements.

Business owners were able to take part in choosing the styles of lighting, benches and planters.

The enhancement project came in at approximately $800,000, which included about $600,000 of funding from the Texas Department of Transportation.

Queen is bearer of a long tradition

For Taryn Crochet, tradition is very important. As the 2016 CavOILcade Queen, Crochet is already a part of a Southeast... read more