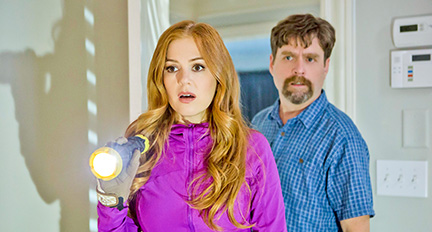 Zach Galifianakis and Isla Fisher as Jeff and Karen, the ordinary couple living next to spies in “Keeping Up With the Joneses.”

THE MOVIE GUY: Falling flat with the ‘the Joneses’

Keeping Up With the Joneses

a star and a half

I think that comedian Zach Galifianakis is a very funny man, although you might not agree with me given his last few films. His latest endeavor, “Keeping Up with the Joneses” is a mediocre action/comedy that fails to do anything original with its story and wastes its otherwise talented cast. Most unforgivably, the film doesn’t generate any genuine laughs, which is a pretty big problem when you’re making a comedy.

It’s a shame because the story has some nice comedic potential. Galifianakis and Isla Fisher play Jeff and Karen, an average, everyday married couple looking for something to spice up their suburban lives while their kids are away at camp. Excitement arrives in the form of Tim and Natalie Jones (Jon Hamm and Gal Gadot), a glamorous couple that moves into the house next door. The two couples strike up a friendship, but it doesn’t take long before Jeff and Karen start to wonder if their new neighbors are simply too good to be true.

It’s not a spoiler to anybody who has seen the film’s promotional materials, but Tim and Natalie turn out to be spies. No sooner is this fact revealed than bullets start flying and Jeff and Karen find themselves in way over their heads. In theory, that should have provided ample opportunity for comedy as we watch these everyday folks try to get out of one absurdly perilous situation after another.

In theory, it should have been very funny. In reality, everything lands with a thud. The action set pieces and big comedy moments fall flat time and time again. Galifianakis brings a bit more energy than usual to his role, but he’s just not strange enough to be truly memorable. Fisher and Hamm aren’t given many moments to shine and Gadot struggles with her line delivery. It’s a good thing that nobody expects Wonder Woman to be funny.

Add in some truly simplistic cinematography/lighting and a clichéd musical score and we’re left with a film that struggles in almost every category. I wish that I could say that “Keeping Up with The Joneses” was simply a mediocre bit of escapist entertainment, but this turns out to be another major disappointment for Galifianakis.

I still think that Galifianakis is a very funny man, but he could certainly use some help when picking his next project.

THE MOVIE GUY: ‘Accountant’ adds up to minor fun

Ben Affleck’s new movie, “The Accountant,” is a strange mix of an action flick and a character study. These two... read more