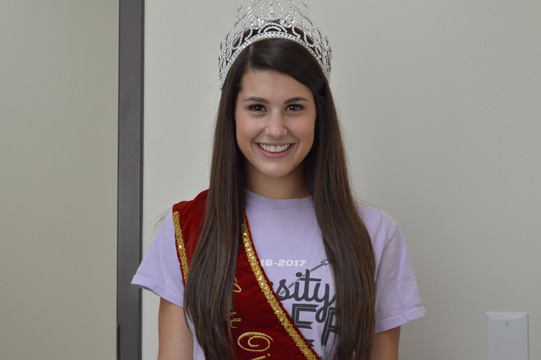 Queen is bearer of a long tradition

As the 2016 CavOILcade Queen, Crochet is already a part of a Southeast Texas tradition that dates back to 1953.

However, the CavOILcade queen and pageantry has also been a part of Crochet’s family for generations.

“It’s been a tradition for 40 years in my family,” Crochet said. “My grandmother and great aunt did it, and my mom and all her sisters were in it, too.”

For the 17-year old senior at PNG, that sense of tradition was an important draw for her.

“That made it a huge deal and I was excited to be a part of it,” Crochet said.

“It was super exciting and it was more than I expected it to be. It blew my mind and I absolutely enjoyed it.”

Crochet was also quick to point out that she never felt any pressure from her family’s longtime association with CavOILcade. In fact, it only seemed to spur her onward.

“My mom had a shrine with photos of every member of my family who had been in it,” Crochet said when she returned from her interview for the title. “They all looked so pretty in their white dresses. It meant a lot.”

When she won, it meant even more.

“I was super shocked. I did not expect it. I feel so blessed to hold the title of CavOILcade Queen. I feel blessed to represent such a town,” Crochet said.

The 2016 Queen was also not the first one of her family to win such an honor.

“My nanny won forever ago,” Crochet said. “So I’m the second one to win (in my family).

“It’s an amazing feeling to have such a background in my life. It’s such a good feeling. I feel blessed to have something like this.”

And as befitting a queen, Crochet has been active in her community.

“I’ve done a lot of community service,” Crochet said, before listing such activities like volunteering in a soup kitchen and tutoring youth at Tyrrell Elementary.

“I read books to them, do dance-offs and help them with math,” Crochet said of her time at Tyrrell. “It’s great when I see those kids’ eyes light up.”

Crochet plans to attend the University of Texas at Austin after she graduates.

“I want to go the business route — economics, numbers. I love math.”

Crochet mentioned that education is a “big part” of her life before she considered opening her own business some time in the future.

“I’m really into baking. I’m already selling cupcakes, cookies and other treats… I might end up owning my own bakery.”

In her free time, Crochet likes to celebrate her faith.

“I’m really involved with my church and Young Life.

“(YL) is nondenominational and it’s about worship and games. It’s my place to go.”

When asked about advice for future contestants, Crochet was succinct.

“Basically, my advice is do it. It’s more an experience than a pageant… It’s a great way to bond with each other and to meet more people and have a lot of fun.”

And for Crochet, it also happened to be a good way to keep tradition alive.

“It goes back to tradition. It’s impacted my family’s life in a big way. It’s an amazing part of my family.”

Overtime laws will be changing