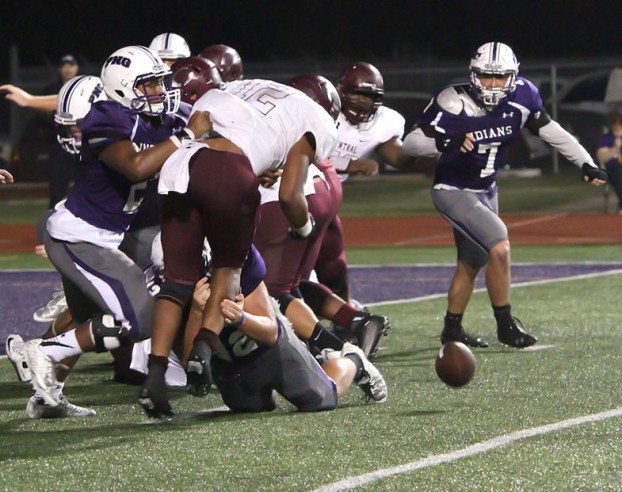 Trey Rembert, left, and Jake Piekenbrock, bottom, of PN-G force Central running back Devwah Whaley, who is now a freshman at Arkansas, to fumble near the end zone late in the first quarter in 2015. (Tommy Mann/Special to The News)

Among the Port Neches-Groves Indians’ toughest rivals, it may come as no surprise the Central Jaguars are among them.

The Jaguars and Indians have built a competitive series against each other that dates back to 1986, when Central was first established. Central leads 9-8, but four of its meetings with PNG since 2009 have been decided by eight or fewer points. PNG won 21-7 last season.

“Our kids get up for the game, and I think PNG gets up for the game,” Jaguars coach Toby Foreman said Thursday. “I think we’ve played five overtimes in the last three years. But I’m expecting a good game.”

Both teams still have plenty to play for.

The Indians (6-1, 4-1 in 22-5A) are still in contention for a district championship despite coming up short in its comeback attempt at unbeaten Port Arthur Memorial. The Jaguars (3-4, 2-3) are one game behind Livingston for the fourth and final playoff spot from the district, but stand sixth as Nederland is 3-3.

“We’re just taking it one game at a time,” Foreman said. “That’s all you can do. I can’t be worried about the next two weeks. When you go to The Reservation, that’s a tough place to win, and we’ve got to go in there.”

The Indians will be happy to host after playing in front of a sellout Memorial Stadium crowd, but coach Brandon Faircloth knows the Jaguars are no walkover.

“Just like every team in our district, coach Foreman is a great coach with good players,” Faircloth said. “They’re very athletic. They can score at any time. They have a big, physical defense. They’ve got a great team. They always do. They’re always toward the top in our district. It’s going to be a tough football game for us on Friday night.”

Central has won two of its past three, including a 35-34 nailbiter at the Thomas Center over Lumberton. Foreman is counting the Jaguars to play turnover-free for the second straight game and improve their defensive play with several players who were injured last week returning.

He’ll need all the help he can get on defense. The Jaguars have to find a way to contain sophomore quarterback Roschon Johnson, who ran for all three of the Indians’ offensive touchdowns at Memorial and has targets Keynel McZeal and Preston Riggs to choose from. Preston Hughes can also deliver a big rushing game.

“The quarterback is the catalyst on the offense,” Foreman said. “As he goes, they go offensively, but they do a good job on the offensive line.”

PNG, conversely, is tasked with slowing down quarterback Chris Boudreaux and all-around athlete Deshon Moreaux, who ranks among the top rushers and receivers in the district.

Asked if everyone on his team is healthy, Faircloth said: “It’s getting that way. After you play Central, you’re a little banged-up sometimes.”

In such an intense rivalry, Foreman enjoys taking a team to The Reservation because of its environment. In fact, he embraces the challenge.

“I was telling the PNG coaches who were scouting the Ozen-Nederland game the other day, ‘Cherokee’ is my favorite fight song,” he said. “It’s a good environment. PNG fans, West Orange-Stark and Newton in the area are probably, rich tradition-wise, the most fanatical fans, and they’re smart fans. They understand when to be loud and when to be quiet.”

Foreman would rather “Cherokee” not be heard as much tonight and the Jaguars’ play have everything to do with it.

“I’m going to limit it as much as I can,” he said. “They’re going to play the mess out of it. I think it’s a good environment.”

The Universally Inconsistent League dropped the ball again. When its high school baseball and softball playoffs roll around next spring,... read more