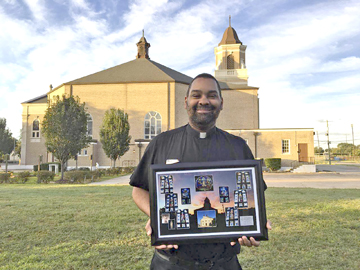 The Rev. David Edwards, pastor of St. James Catholic Church in Port Arthur, holds a print of a limited edition of the beatitudes the church was built around and depicted within the stained glass windows. A limited number of custom framed prints will be available as part of the silent auction and open for bidding at a fundraiser the weekend of October 22.

Mark Byars, an organizer for a fundraiser for St. James Catholic Church, said he doesn’t want the church to share the same fate as happened to St. Mary’s Catholic Church in downtown Port Arthur in the mid-2000s — a date with the wrecking ball.

“I love the connection people had have over the years with St. James. That’s the biggest thrill. I’m nostalgic for Port Arthur though I’m in Nederland.”

“In the back of my mind I think what happened to St. Mary’s and it’s (St. James) worth fighting for.”

Byars said he and the Rev. David Edwards, pastor of the church, were classmates at Thomas Jefferson High School in Port Arthur though Edwards was a year behind him.

From 7 p.m. to 11 p.m. there will be a fundraiser dance and silent auction at Kirwin Hall, adjacent to St. James Catholic Church, 3617 Gulfway Drive in Port Arthur.

At 11 a.m., there will be a “Homecoming” Mass with a reception immediately following.

“We have 12 teams now. We’ve invited priests and the religious to catch up with each other,” he said. “It’s amazing the number of people’s parents who were married there or who were buried there. There’s still strong commitments to the church from people who don’t live here anymore. There’s a strong affection.”

He added a fundraiser in August to install stained glass windows in which Jivin’ Gene Bourgeois performed had a “great response.”

The entry fee is $300 per team and/or $75 per person (includes green fee, cart, food and drink). Participants can register the morning of the tournament at 8 a.m. if need be.

There will also be a four-man ball scramble.

The dance is $300 for a table of 10. One does not have to have a golf team to purchase a table at the dance. Participation is separate.

 Attendees may bring their own drinks and food. Bottled water will be provided.

 Door prizes and silent auction will be held throughout the night.

 There are only 25 sections of 10 seats sold as groups of 10 until all sold.

 Group purchasers’ names will be displayed at the dance and golf tournament and in church bulletin as a “Friend of St. James.”

General donations may also be made for those who can’t attend.

Risa Carpenter has been around the world but she wanted to come back home to Southeast Texas. Consequently she just... read more