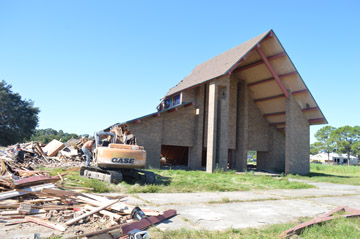 The former Presbyterian Church of the Covenant at the intersection of Gulfway Drive and Stadium Drive in Port Arthur was demolished this week. There's a possibility an H-E-B store will be built on the site two years from now.

Clay Faulk, the last pastor of Presbyterian Church of the Covenant, called the demolition of the old church building at Gulfway Drive and Stadium Drive that started last week a “sad situation.”

“It was a beautiful building,” he said. “Over the years it has served the Lord well. The people who purchased the land, however, wanted to make some changes.”

H-E-B may have plans to develop on the property rather than on the old First Baptist Church of Port Arthur property because there is more land across the street.

Cyndy Garza-Roberts, a public affairs specialist with H-E-B, said by telephone, however, it will be two years before the company starts any kind of construction. She added that the company has other commitments for other stores in the Houston region.

“We have other stores on the books,” she said.

Faulk said they had to change to survive. As a result they purchased property north of Nederland on Texas 347 and opened Providence Church in 2010.

Faulk said the simple truth was the church wasn’t bringing in younger people while the congregation was older.

“That’s the reality of today’s church,” he said.

While these church structures are being built it’s up to future generations to keep up the buildings.

“The management of the property is great,” Faulk said. “We were spending money right and left fur upkeep. We had multiple ACs, roofs needed replacing, the grass mown.”

Now at Providence, the church is averaging 300 in attendance every Sunday, but it wasn’t always that high. In 2005 when Faulk became pastor there were 130 in attendance on Sundays. That number fell to 75 just before the move to Nederland.

“An extreme majority of our congregation was seniors citizens. We love senior citizens, but a church needs families and younger people,” he said.

In a prior News article, a consulting expert from Houston was hired to provide demographic information and discovered the growth of the area was toward Mid-County.

The church was originally called First Presbyterian on Fifth Street and had been in Port Arthur for 100 years. It later merged with Westminster Presbyterian in the 1950s and was renamed Covenant.

The vote total of those in the membership in favor of selling the property on Gulfway and Stadium was 73 percent.

In a prior News article dated July 2014, H-E-B officials purchased the 6.531-acre corner lot at 5000 Gulfway where the First Baptist Church of Port Arthur had stood since 1949. The church building was torn down to make way for the H-E-B.

The company originally thought the new store would be opened after the first of 2015.

The store has not made any announcements if they will close any of the existing H-E-B stores.

First Baptist did share a space with Procter Baptist Church on Jimmy Johnson Boulevard until First Baptist moved into their own building on FM 365 in March in the former Stonegate Church of Christ in.

“We’ve been blessed (since moving to their new building),” Faulk said. “We do a contemporary style of worship.”

“There’s a value to having a plan and carrying out a plan. Our focus is on reaching out to people who are not in church and offer them something different. When we moved and if we still had only 70 on Sundays we decided we would either make or break it.

Sergio Sanchez vowed to be first place during the recent Gift of Life Ribbon Rush Color Run. And he did... read more