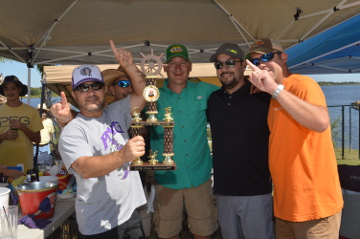 Members of Team Chililicious show off their first place trophy after being named winners of the Wheelhouse Chili Cook-Off in Port Neches on Saturday. Mary Meaux/The News

PORT NECHES — Team Chililicious lived up to its name and has a trophy to prove it. 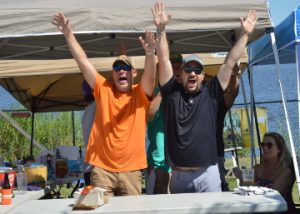 Daniel Tentrup, left, and Jason Vice, members of Team Chililicious, let out a cheer as they were named winners of the Wheelhouse Chili Cook-Off in Port Neches on Saturday.
Mary Meaux/The News

“Chililicious lived up to its name,” Todd Clemmons said as the team cheered over their victory and bragging rights.

Patrons had a chance to buy a $5 taste cup and sample chili from the different teams and vote on their favorite. The team with the most votes earned the People’s Choice award. This year the award went to BSP, which stands for Bradley Steele and Pierce Attorneys at Law. They also earned second place.

Returning taste testers and friends Daniel Mullens and Mason Vizena went both to booth checking out the different styles of chili. Prior to the announcement of the winner the duo said they liked the chili from the Groves Knights of Columbus booth.

“Everybody’s chili is a little it different,” Mullens said.

The KC’s chili came in third place in the competition.

Team Comin’ in Hot won the event two years ago and worked hard at adding flavors to their chili. Aron St. Aubin said it was trial and error when concocting the chili. Their style this year was bacon cheeseburger chili.

Judges of the event, Port Neches Fire Chief Paul Nelson, Steve Shelburne and Justice of the Peace Brad Burnett, sampled the chili’s which were judged on aroma, consistency, taste, color and after-bite.

Port Neches residents and local community members got the chance to meet their local police and to enjoy themselves with... read more