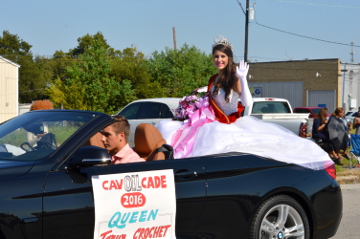 Marching bands, elementary schools and royalty made their way down Procter Street for the annual cavOILcade parade on Saturday.

The 2016 cavOILcade queen, Taryn Crochet, held a spot of honor in the parade. Crochet, the daughter of Tami and Troy Crochet, is a Port Neches-Groves High School student where she is co-head varsity cheerleader, member of the National Honor Society and other organizations.

The parade began at Lamar State College Port Arthur and went down Procter Street where families and supporters dotted the street taking photos as the festive event made its way down the road and participants tossed candy to children.

The family of Lincoln Middle School band student GeRacio Pete gathered in the 900 block of Procter and set up a few chairs.

“Family is forever,” Elke Portley said as they waited to catch a glimpse of the band.

Elke Portley was there with Lillian Portley, GeRacion Pete, Jayden Reed and Ronald and Paulette Borders.

Portley are big supporters of the LMS band and were sporting band T-shirts with the slogan “It’s Going Down” on the back.

Jamie Coker of Nederland, who was there to see her daughter cavOILcade Princess Haley Coker, was hanging out with friends Sandra and Carey Erickson whose daughter Carley Erickson is also a cavOILcade princess.

“It’s been a great experience for the girls,” Coker said. “Ms. Trosclair did an awesome job. This is an experience she’ll (Haley) never forget.”

Cary Erickson, a 1979 graduate of Thomas Jefferson High School, remembered back to when he was a cavOILcade escort and to a few years later when his sister, Carla Erickson, was a contestant.

Rachel Newcost found a spot in the shade to watch her two daughters, Kaitlin and Loren march by with the LMS band, Christy McCreary and Lionel Loval were on hand to see Gavin McCreary and Allanah Dennis was there to watch Kendreia Dennis.

“It’s been pretty fun,” Amy Sanchez said. “We saw the queens and everyone is out enjoying themselves.”

Ana Gonzalez and Manuel Rodriguez sat on their truck’s tailgate with their daughters Maritza and Viviane Rodriguez nearby. Gonzalez said they didn’t have any family members in the parade, they had just come out to watch.

CavOILCade, which began in 1953, pays homage to the southeast Texas area’s oil and petrochemical industry.