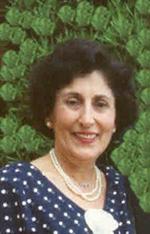 She was born on April 15, 1926 to Anna Grecco Gennuso and Dominic Gennuso in Washington, Louisiana. Angie graduated from Opelousas High School in 1944. After the war broke out, she became the first female deliver for the Opelousas Newspaper. Angie lived in Nassau Bay with her husband, Carl for 48 years, where they were founding parishioners of St. John’s Catholic Church. She has been living in Port Neches for the last three years.

She was preceded in death by her parents, her six sisters, Josie, Sarah, Louise, Frances, Mary and Theresa, her three brothers, Joe, Samuel and Frank and three husbands, Carl Andrew Romero, Milton Plessal and James Malandruccolo.

Angie is survived by her sister, Anne Marie Brogdon and her son, Paul N. of Groves, her brother, George Gennuso and his wife, Verbie of Opelousas, La.,

Visitation for family and friends will be on Monday, October 3, 2016 from 5:00 PM to 8:00 PM with a vigil service to be held at 6:00 PM at Clayton Thompson Funeral Home in Groves. A Mass of Christian Burial will be celebrated at 10:00 AM Tuesday, October 4, 2016 at St. Elizabeth Cathoic Church in Port Neches with Rev. Shane Baxter serving as celebrant. Burial and graveside service will be at 10:00 AM Wednesday, October 5, 2016 in Houston National Cemetery.

Salvador “Chava” Fernandez, 86, of Port Arthur, Texas passed away on Saturday, October 1, 2016 at the Medical Center of... read more