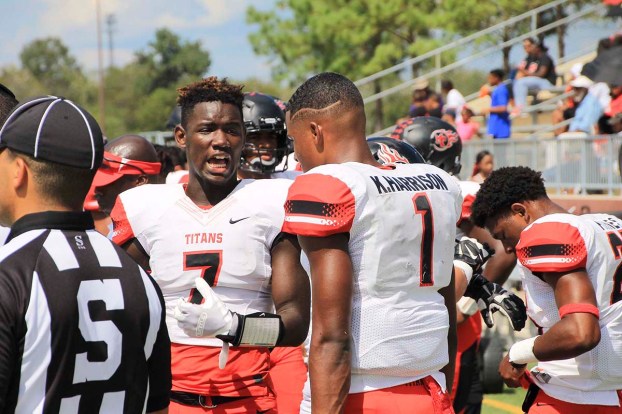 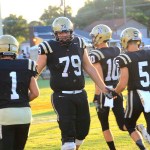 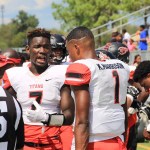 Kenny Harrison and Larry Neumann need no introduction to each other, although their football teams will meet for the first time tonight.

The two head coaches have a relationship that goes back almost 30 years, back to their days at Thomas Jefferson, one of the forerunners of Port Arthur Memorial.

“When I got to TJ he was an assistant coach my four years there,” Harrison, now Memorial’s eighth-year head coach, said of Neumann. “He was my defensive coordinator my senior year. I guess I have known him since 1987. He was a great assistant coach and there is no surprise he is having the type of success he is having there at Nederland.”

Neumann has been Nederland’s coach since 1993, when he left his defensive coordinator role at Jefferson after more than a decade.

“I have fond memories of Port Arthur and my time there and the guys I coached,” he said. Three former Jefferson players during his time — Harrison, Kary Vincent Sr. (cornerbacks coach) and T.K. Harrison (co-offensive coordinator) — are on the Memorial staff.

“It was a great time in my career,” Neumann said. “I still value those memories. However, I’ve been in Nederland 23 years. And that seems like a lifetime ago.”

Flash forward to 2016, and for the first time, Harrison’s Titans and Neumann’s Bulldogs will square off tonight. The significance of a newfound rivalry is not lost on the players, either.

“I can see our kids going a little harder this week, but we try to emphasize with our kids you don’t get five wins for beating Nederland,” Harrison said. “I don’t want to put emphasis on one team and not the other. We put the same emphasis on all the teams.”

Said his son Kadon, the Titans’ quarterback: “It’s just another game. It is something new for us since we have never played Nederland. We are always seeing them on TV and in the paper, so it is exciting to everyone on the team.”

It’ll be the first time in 15 years — the time that Memorial has been around — since Nederland played a Port Arthur team. Neumann has had some success against the Port Arthur ISD, owning a 6-2-1 record against Jefferson, 8-1 mark against Lincoln and 2-0 mark against Stephen F. Austin.

Monte Barrow, Nederland’s offensive coordinator who’s been on staff since Neumann’s arrival, is looking forward to the challenge.

“To be back playing Port Arthur, [our players] know kids over there like they do Port Neches and Vidor,” Barrow said. “Anytime it’s big for kids, we’re going to make it big for us, too.”

Neumann’s Bulldogs have won or shared the District 22-5A championship the past five years, but they already have their hands full in more ways than one.

First, they’re 2-1 in the district (2-3 overall) after a home overtime loss to Vidor last Friday, so they’re a half-game behind the Titans (3-0, 2-0) in standings. Secondly, they’ve weathered injuries to key skill players in recent weeks, including running back Devon Simmons and quarterbacks Marshall Lange and Blaysin Fernandez.

But Neumann expects injuries to occur in football, and the developments have not caused him to press the panic button.

“I think our team continues to have high expectations,” he said. “We aren’t discouraged by setbacks. We haven’t been this year. As dramatic as the end of [the 29-28 loss to Vidor] was, I don’t think it caused us hangover of any type. You go practice, knowing you’re fixing to play a very good football team Friday.”

Simmons and Lange sustained high ankle sprains, although the latter stepped in at quarterback against Vidor when Fernandez was concussed. It is not yet known if either player will be available tonight.

“They are a team with pride and tradition,” Kenny Harrison said. “The biggest thing about this district is all the teams play extremely hard. I have noticed they don’t pay attention to the scoreboard. Whether they are up or down, the kids are playing hard.”

Thirdly, the Bulldogs continue their title defense on the road against a team the pundits heavily favor to win 22-5A after a long run with the likes of North Shore and West Brook in 6A. The same team that just pounded Ozen 62-0 last Saturday for its largest win margin in history.

“Regardless if they are the defending district champs, we always have respect for them,” Harrison said. “We want the district championship this year, so they are going to have to step it up this round.”

Memorial has built its own tradition of winning and producing major-college talent in its short history, nearly reaching a state final in 2011. Three of the Titans’ skill players, cornerback Kary Vincent Jr. (committed to LSU), De’Andre Angelle (four offers) and Kadon Harrison (committed to Louisiana-Lafayette) have been offered Division I scholarships, with junior running back Elijah Hines and senior wideout Adrian Williams enjoying breakout seasons.

“We’ve just got to get ready for their speed and not getting beat deep. Speed mostly,” junior defensive back/linebacker Randy Wistner said. “I think we’re ready and excited because I mean they’re so close, and we’re always talking and we never get to play them.”

Tonight, the Titans are favorites to win as they and the Bulldogs continue to shape the 22-5A race. The players and coaches on both sides welcome a new challenge, but for Kenny Harrison and Neumann, it’s also another big game in their storied careers.

“I have the same amount of respect for every program, not just Nederland,” Harrison said. “I understand the time and work coaches put into the program. I would be wrong if I told you if I had more respect for that program and any other program.”

Gabriel Pruett contributed to this article.

Angelle wants to prove his worth

What Division I colleges could be missing in De’Andre Angelle has been Kenny Harrison’s gain. Angelle has four scholarship offers.... read more