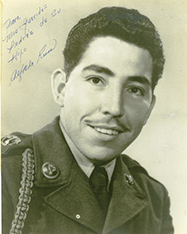 Alfredo was born on March 3, 1931 in Lopeño, Texas to parents Isabel (Lopez) and Melquiadez Rosas. He had served his country, in the 1st Calvary, during Korean Conflict in the US Army and retired from Great Lake Carbon after 23 years as a welder. He was member of Our Lady of Guadalupe Catholic Church; he was an usher for many years. Alfredo enjoyed going fishing, hunting, listening to music and playing his guitar. Alfredo was a loving husband, father, grandfather, uncle and friend who will be missed dearly, who loved spending time with his family.

He was preceded in death by his parents, his daughter, Mary Louise Rosas Garza; his brothers, Adan Rosas and Eduardo Rosas.

A visitation will be held on Saturday, October 1, 2016 from 5 pm until 8 pm at Clayton Thompson Funeral Home, with a rosary to be prayed at 6 pm by Rev. Urbano Sáenz. Cremation will follow the services.