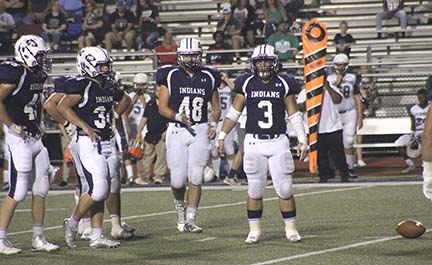 From left, Jacob Brown, Logan Hammonds, Vade Hammond and Cole Robinson line up on defense for PNG against Livingston on Friday. (Arthur Robinson/Special to The News)

PORT NECHES — If there is one guy — and there are plenty more than one — that has never lost confidence in Port Neches-Groves receiver Keynel McZeal, it is his quarterback, sophomore Roschon Johnson.

Johnson found McZeal for two touchdowns Friday in a 41-21 victory over Livingston at The Reservation.

“I always trust him,” Johnson said. “We throw those deep passes all the time. It is all about trusting him in the game. I have major confidence he is going to catch the ball. There is never a confidence issue.”

The second touchdown strike hauled in by McZeal had the Indians fans scratching their heads. Johnson threw the ball up with 6 seconds left in the first half and McZeal grabbed the ball over his shoulder with one hand for a 36-yard touchdown to put the Indians up 21-0 at the break.

“He can make almost any play,” Johnson said of his receiver. “I threw it up and he made a play.”

“Tonight was a big relief off my shoulders,” McZeal said. “Coming in with no touchdowns and not a lot of yards, tonight felt good.”

It felt good for a lot of Indians.

Johnson threw for 189 yards on 13-of-18 passing with four touchdowns and no interceptions. He rushed for 84 yards with one score.

Livingston (2-3, 1-2) struggled on offense until the fourth quarter. The Lions had 58 total yards at the half.

Livingston scored three touchdowns in the fourth, two from receiver Christian Mitchell. He had touchdowns of 75 and 35 yards and had 169 yards on six catches. He came into the game with 624 yards on 21 carries with eight touchdowns.

PNG’s defense came away with an interception, this one by Cameron Stansbury.

“We are always working, even if it is the fourth quarter,” Stansbury said. “We had great effort at the end. Mitchell is a great player. He made some plays and we made some plays. Overall, I thought it was a good night for the defense.”

PNG outgained the Lions 430-296. Livingston passed for 241 yards and 209 of those came in the fourth quarter on five passes.

“I was happy with how we came out, especially off the bye week,” PNG coach Brandon Faircloth said. “The defense kept us in the game the whole time.”

Preston Riggs also had two touchdowns for the Indians. He scored on a 14-yard pass from Johnson to open the Indians scoring and then hauled in a 43-yard pass to put the Indians up 34-7 in the fourth.

The Indians rushed for 241 yards on 39 carries for an average of 6.2 yards per carry.

“We have great skill guys and we are just trying to give them a chance,” PNG center Justice Langston said. “We lock on and stay on our blocks. We know we have guys like Roschon, Preston Hughes, Riggs, Dylan McGough and Keynel. It is easy up front. We have to open up just a little hole and block just for a second because those guys will make plays.”

The Indians now travel to face Baytown Lee next Friday in another District 22-5A battle.

“It is never going to be easy,” Faircloth said. “Every game is difficult. There is nobody we are going to come up against that will not have great players and not have a great plan. Every game is a battle. We are excited to be 2-0 but we have to keep grinding.”
•
Gabriel Pruett: 721-2436. Twitter: @PaNewsGabe

By Gabriel Pruett gabe.pruett@panews.com The Port Arthur Memorial Titans are finally feeling good about themselves again. Memorial is 1-0 in... read more