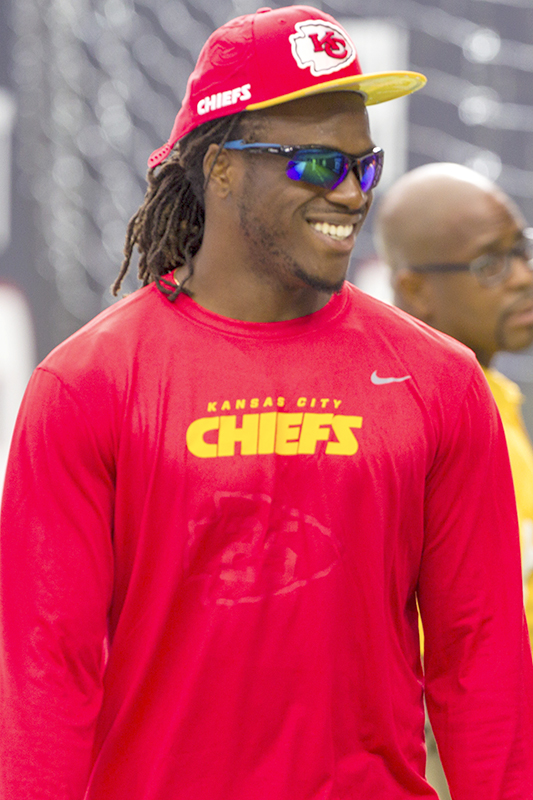 Kansas City running back Jamaal Charles, from Port Arthur, sat out Sunday’s game against the Houston Texans. (Max Siker/Special to The News) 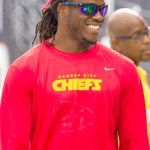 Kansas City running back Jamaal Charles, from Port Arthur, sat out Sunday’s game at Houston. (Max Siker/Special to The News) 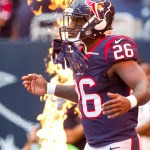 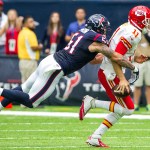 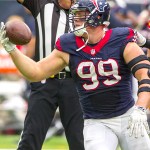 J.J. Watt of the Texans recovers a fumble against the Chiefs on Sunday. (Max Siker/Special to The News)

Kansas City running back Jamaal Charles, from Port Arthur, sat out Sunday’s game at Houston. (Max Siker/Special to The News)

J.J. Watt of the Texans recovers a fumble against the Chiefs on Sunday. (Max Siker/Special to The News)

HOUSTON — The Houston Texans are 2-0 for the second time under coach Bill O’Brien after a 19-12 win over the Kansas City Chiefs Sunday at NRG Stadium.

Houston used a strong defensive output to get the better of the Chiefs, who beat the Texans twice in 20-15, including a 30-0 victory in a wild-card playoff game last January.

Hopkins scored on a 27-yard touchdown throw from Brock Osweiler in the first quarter to give the Texans a 7-0 lead.

O’Brien was quick to point out last year’s losses to the Chiefs did not play into how the Texans performed Sunday.

“Every year is different,” O’Brien said. “That wasn’t a good day for anybody involved with our football team, but this is a different team. There’s a lot of guys on this team that weren’t here on that team. I think it was just a really good early season victory for our football team.”

J.J. Watt, after not playing the entire preseason following a back surgery in the offseason, recorded five tackles, 1 1/2 sacks and a fumble recovery. He showed little rust that plagued him in the season opener against Chicago.

“I think we’re getting closer,” Watt said. “I don’t think I’m all the way there yet. But, I definitely felt a little better today than I did last week, and I think it’s going to continue that way.”

Osweiler threw for 268 yards on 19-of-33 passing with two interceptions, both to Marcus Peters. Osweiler has thrown three interceptions in the first two games.

“I think I have to do a better job of coaching him just on some of the things that we’re looking at from a defensive standpoint, and I know that he’s going to work hard not to do that,” O’Brien said. “I’m not concerned about that at all.”

RECEIVING STARS
Hopkins (113 yards on 7 receptions) and rookie receiver Will Fuller V (104 yards on 4 receptions) each notched 100-yard performances. It was the first time since Nov. 17, 2013, against Oakland the Texans had two players with over 100 yards receiving. Tight end Garrett Graham and Andre Johnson both reached the century mark against the Raiders that day.

The last time two receivers did it was on Sept. 19, 2010, when Johnson and Kevin Walter did it against Washington.
Fuller is the first rookie in franchise history to open his career with back-to-back 100-yard games.

“I think that’s a credit to how hard those guys work in the offseason,” Osweiler said. “But more importantly than stats, I think the best stat right now is 2-0. I am not worried about who has what yards receiving, who has what yards rushing, what I’m throwing for, all I care about is wins and losses and right now we have two huge team wins to start the season and that’s what I’m truly proud of right now.”

NO JAMAAL CHARLES
The Chiefs played again without Port Arthur native Jamaal Charles who suffered a knee injury early last season and has yet to play this year. Kansas City rushed for 119 yards on 19 carries without Charles, including a 61-yard performance from Charcandrick West on just six carries. Spencer Ware got the bulk of the carries for the Chiefs. He rushed for 57 yards on 10 carries.

“I thought we did some good,” Kansas City coach Andy Reid said of the Chiefs’ running game. “We had a fumble on the ball. I don’t think this was a thing where it was Jamaal, or not Jamaal. That’s not where we’re at. We’ve got to play better football. He didn’t cause three turnovers and nine penalties. That wasn’t due to Jamaal. If we take care of those things, we’re a pretty good football team.”

HOLDING DOWN KELCE
Stopping Chiefs tight end Travis Kelce was one of the keys to victory for the Texans. Kelce had 254 yards on 14 receptions and two touchdowns in two Chiefs’ wins over Houston last year. Kelce was held to 34 yards on five catches in Sunday’s win. Kansas City was 0-for-2 in the red zone and 3-of-14 on third down, thanks in large part to the defense’s play on Kelce.

Cornerback A.J. Bouye was given the task by the Texans’ staff to slow down Kelce this year. O’Brien said Bouye was up to the task after covering Hopkins in practice since Hopkins and Kelce are close to the same size.

“There’s some similarities there, so we felt like that would be our best bet to put on him,” O’Brien said. “Obviously we doubled him and did different things there, too. I thought A.J. looks like he played a pretty good game.”

PATRIOTS ON THURSDAY
It is a quick turnaround this week as the Texans taken on the 2-0 New England Patriots on Thursday at Gillette Stadium in Foxborough, Mass. The Patriots are down to third-string, rookie quarterback Jacoby Brissett after Jimmy Garoppolo was injured during Sunday’s 31-24 win over Miami.

Tom Brady still has two games left on his suspension for ‘Deflategate.’ O’Brien spent four seasons with the Patriots, serving as the team’s offensive coordinator in 2011.

“No advantage,” O’Brien said in reference to his time in New England. “They’re a reall good football team, great coaching staff, great players, very good at home. Not sure how many games they’ve lost over the last 15 years at home but it’s not many — might be single digits — so it’s a very, very big challenge for our football team. Our guys will be ready to go and we’ll have a good week here and we’ll go up there and we’ll give it our best effort.”
•
Gabriel Pruett: 721-2436. Twitter: @PaNewsGabe