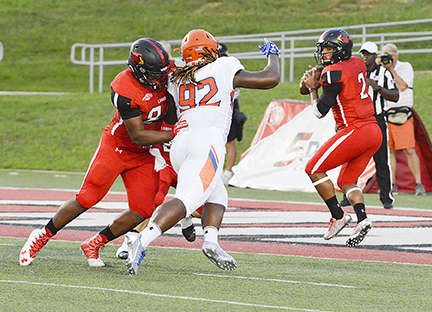 BEAUMONT — Coach Ray Woodard suggested earlier in the week Lamar might be getting better because the Cardinals have played “good people” as in FCS power Coastal Carolina and FBS sixth-ranked University of Houston.

The Cardinals (0-3, 0-1 Southland) banned media from practice throughout the week and broke out a new starting quarterback in Andrew Allen in hopes of crafting an upset of the Bearkats (2-0, 1-0) for the second year in a row. Allen completed 19 of 36 passes for 178 yards and two touchdowns, but the Cardinals gave a mostly prosaic performance at Provost Umphrey Stadium before a crowd of 8,343.

Allen was knocked out with 8:29 left in the game, but would re-enter. Carson Earp, who had started the first two games, came in and ran 67 yards on a zone read option to narrow the deficit to 37-24.
Earp rushed twice for 72 yards and did not attempt a pass.

Sam Houston State, an NCAA Division I semifinalist four of the past five seasons, gave an early indication of how long Lamar’s night would be — by scoring quickly. The Bearkats covered 75 yards in five plays on the opening drive, capped by Corey Avery’s touchdown run from 9 yards out.

But the Cardinals failed to wrap up SHSU wideout Yedidiah Louis and Avery. Louis had 113 yards on eight receptions and Avery racked up 136 yards on 17 carries, both doing the majority of the damage in the first half as the Bearkats led 30-3.

Lamar missed tackles on Avery’s 35-yard catch and run from Jeremiah Briscoe in the second quarter.

TREADWAY RETURNS
Preseason All-America offensive guard Bret Treadway made his season debut after a lengthy bout with mononucleosis. But his return didn’t do much to help a Lamar offensive line that could not keep SHSU from shutting down the Cardinals’ running attack.
Harrington had eight straight games of 100 or more yards rushing before the McNeese State game.

TRICKERATION
Needing something to keep the game from getting out of hand, senior cornerback Brendan Langley took a handoff in field-goal formation and sprinted 55 yards for a Lamar touchdown with 47 seconds left in the third quarter. That cut the Bearkats lead to 37-17.

GETTING DEFENSIVE
Langley came up with an interception in the end zone on the Bearkats’ second offensive drive of the game. That set up the Cardinals’ longest drive of the game in number of plays and time, an 18-play, 54-yard march resulting in an Alex Ball field goal. The Cards melted 7:38 off the clock.

Junior transfer Tanner Kanteman sacked Briscoe for a 7-yard loss and recovered an Adrian Contreras fumble at the Lamar 9 on the same drive early in the second quarter.

SHSU’s defensive highlight came a few minutes later, forcing Allen into an intentional grounding in the end zone for a safety to make it 16-3.

Bethany picked off Briscoe and returned it 39 yards to midfield in the fourth quarter, but Davion Davis forced Bethany to fumble and made the recovery at the Bearkats 48.

NEXT FOR THE CARDS
The Cardinals have plenty of kinks to work out in a bye week before hosting Southeastern Louisiana on Oct. 1.

Nobody has said it yet, but everyone around has been thinking it. The fact of the matter is this —... read more