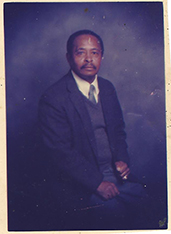 Leroy Antoine Barker, was born on August 28, 1926, he passed on September 6, 2016. He was born to the union of Crawford Barker and Esther Pierre Barker in Port Arthur, Texas.

He was raised in Mermentau, Louisiana, but returned to Port Arthur, Texas when he was 19. He went to work for St. Mary Hospital where he met and married Mary Nell (Langlanais) Barker. They had 5 children, Anna Maria Howard (Aaron Howard), Joseph Karl Barker, Lilly Louise Turner, Leroy Anthony Barker Brown, and Jane Fenwick Barker. They were married 57 years, Lilly has preceded him in death.

Visitation at 10 and Service at 12 noon under the direction of Moody-Harris Funeral Home.

Janet McZeal, 66, beloved Mother, was called to her eternal resting place on August 26, 2016. She entered this world... read more