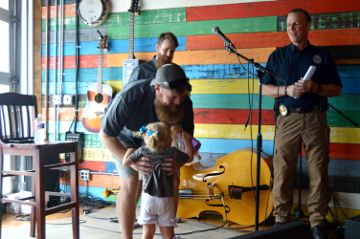 Tyler Blount picks up his daughter, Logan, as David Pool, far left, and Port Neches Chamber of Commerce President and Police Chief Paul Lemoine look on during a ribbon cutting ceremony at Blount and Pool’s brewpub, Neches Brewing Company, in Port Neches on Thursday. The business will open to the public at noon on Sunday. Mary Meaux/The News

The brewpub, 1108 Port Neches Ave., will officially open is doors to the public at noon Sunday with live music and Blue Daves Barbecue will be parked outside with food. 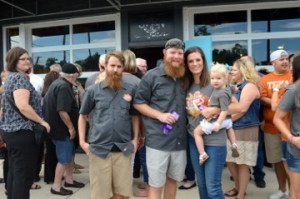 Co-owners Tyler Blount and David Pool took to the small stage area where they looked out onto a sea of well wishers.

Blount explained work on the business began about two years ago but the real work — learning to brew, began about 7 to 8 years ago.

“It’s been a long time coming,” Blount said thanking the supporters. “Time away form my family and my little girl.”

Blount stopped speaking for a moment to collect his emotions as his daughter, Logan, walked to the stage wanting to be held by her father.

Debbie Plaia, executive director of the Port Neches Chamber of Commerce, attested to the duo’s hard work as her office is directly next door to the brewpub. 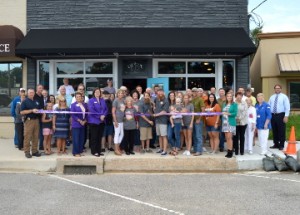 A ribbon cutting was held to celebrate the upcoming opening of Neches Brewing Company in Port Neches on Thursday.
Mary Meaux/The News

“They put their heart and soul into this,” Plaia said.

Blount said he was surprised at the turnout for the ribbon cutting and that he had expected only about 10 people; there was about three times that number in attendance.

Brittani Blount, Tyler’s wife, said they are excited about the opening of the business.

“It’s really been exciting,” Brittani Blount said. “He’s been working so hard for so long.”

A “soft opening” for investors only will be held Friday and Saturday. Blount and Pool used a Crowdfunding campaign that raised almost $40,000, he said.

PORT NECHES — Port Neches Avenue is getting a little bit hipper with the addition of Neches Brewing Company. The... read more