Port Arthur native returns to give back to kids 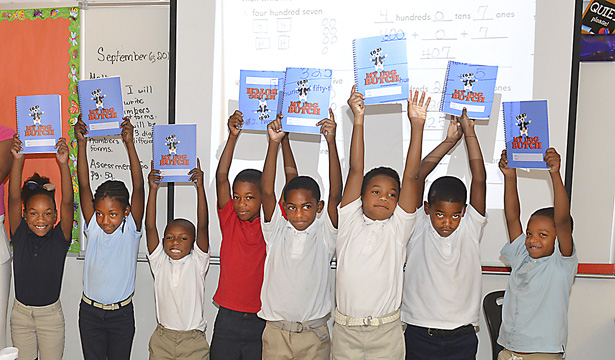 Students in Augusta Dixon's second grade class hold up the notebooks given to them by Rebecca Briscoe. (Roger Cowles/The News)

As students got ready for another week of learning and instruction at Booker T. Washington Elementary School in Port Arthur, some of them received both a surprise and words of encouragement from an unexpected guest.

“You can be anything your heart desires,” Rebecca Briscoe said to the gathered second grade students. “You can be the next Beyonce Knowles, the next Barack Obama.”

“Who wants to be a doctor? A lawyer? A professional football player? A rapper?” Briscoe asked. “Write your dreams down in that journal.”

Briscoe’s aim was to motivate the young students to consider their future and think about what it takes to achieve their dreams.

The philanthropic effort, as initiated by Briscoe, was something wholly endorsed by the school principal.

“It’s important for [the kids] to see people from the community being successful and coming back to help out,” Erica Seastrunk, principal for Booker T. Washington, said.

“[This kind of charity] makes the kids feel cared for, loved, and wanting to do their best because they know someone’s looking out for them.”

A Port Arthur native, Briscoe had taught fourth grade at Washington Elementary School from 2003 to 2004, in addition to teaching at Beaumont ISD and Houston Community College for several years.

“Being in education for so long, I know great teachers go the extra mile to get school supplies, coats, and other items to the students,” Briscoe said.

She mentioned that one of the highlights of being a teacher was socializing with youth and seeing strong family ties present in the community.

“[It’s about] being out in the open and seeing kids have so much fun… Back when, I can remember kids could walk from the neighborhood to the school along with their parents or grandparents.”

Briscoe emphasized the importance of literacy and the role that it plays for young minds, stressing that, “Literacy expands their horizons to think outside of the box. Literacy empowers, it inspires.”

“I hope that they will be phenomenal readers by the time they go to high school,” Briscoe said.

The school supplies that Briscoe donated to the second graders of Washington Elementary were actually the works of another teacher for the Port Arthur ISD, a kindergarten teacher named Terry Savoy-Hadley.

There was a cartoon dog on the cover of the notebooks given out, “My Dog Butch.”

“They’re cute, creative, and help promote literacy,” Briscoe said about the journals. “It’ll start getting kids to use their minds.”

While Briscoe had worked in careers as diverse as modeling, adjunct professor, and program manager, she said, “Education is my passion.”

As such, she stated that she understood many of the challenges that teachers face on a daily basis — namely those of too little time and too little resources.

“Teachers are social workers, nurses, surrogate parents…” Briscoe said. “They do so many jobs in an eight-hour day.”

The Port Arthur-born reporter cited her upbringing as for why she involves herself with the community and why she helps where she can.

“I was raised that way,” Briscoe said. “To get involved, to be part of the solution — I was taught you have to get involved.”

When asked about giving advice to children who would want to get into careers like doctors, lawyers, and professional athletes, Briscoe answered,

“Network. Volunteer. You could meet the chairman at a fundraiser… A lot of people get connections made at [those kinds] of events.”