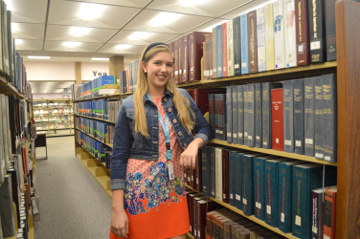 Dani Moses, 17, of Port Arthur is cruising through high school and college courses and working toward a goal of becoming a doctor. Mary Meaux/The News

To say that Dani Moses is ahead of the crowd may be an understatement.

Moses, 17, of Port Arthur, is a senior currently enrolled in the Texas Academy of Leadership in the Humanities at Lamar University and taking 17 college credit hours worth of courses.

Her hard work and dedication to her studies have led her to opportunities to take part in Duke University programs and most recently a trip to The Netherlands.

“During the first week of the summer program we were at Duke then the next week we went to The Netherlands,” Moses said of the Duke University Field Study Program in International Law at the Court of Arbitration.

Moses and other students went to The Peace Palace in The Hague where she saw different courts and sat in on an African human rights corruption case.

Before embarking on the trip Moses and others read The Diary of Anne Frank in preparation for other activities abroad.

“We visited the house Anne Frank was in. Got to see the actual manuscripts she wrote,” she said. “We also visited the Van Gough Museum.”

Moses has been studious for most of her life and began studying to make the best grades possible as far back as the fifth grade. Her earlier high school years were spent at Monsignor Kelly Catholic High School.

“I’ve always set high goals for myself and set out to achieve those goals,” she said. “All of the really cool experiences I’ve had are because of achieving my goals. I would not have gotten into the Duke program without having good grades.”

While at the Texas Academy of Leadership at LU Moses has helped found an international club celebrating local cultures and the people represented in the program. The group’s members share their cultures with others.

Moses is the daughter of Dr. Charles Moses, an obstetrician and gynecologist, and Tonya Moses, an attorney. In the future she plans to major in biochemistry and become a doctor.

Her parents are supportive and proud of her accomplishments.

“Dani possesses the most unique and unwavering driven spirit that is perfectly balanced by her heartfelt kindness,” her father Charles Moses said.

Her mother echoed the comments saying that when she looks at her daughter she sees a brilliant young lady full of promise.

“Yes, I take pride in those facts, but the most beautiful thing about Dani is her heart,” her mother Tonya Moses said. “She thinks and acts with love and compassion all the while maintaining emotional strength and stability. I so deeply admire those qualities in her the most.”

Moses earned a spot on the presidents list in the fall 2015-spring 2016, is a Reaud Honors College participant, member of the literacy club, Junior State of America, STEM Club and Chess Club. While at Kelly High School she was on the Gold Honor Roll, debate team member, volleyball team member and member of the National Honor Society, Mu Alpha Theta, student council, speech and debate club, Spanish Club, Interact Club and Pink Club.

She has also done her part in community service by working with the Symphony of Southeast Texas, Humane Society of Southeast Texas, Community Garden at LU, Young Life Christian Organization, Museum of the Gulf Coast and Hospitality Center of Port Arthur among other accomplishments.

Two men who police say stole several cases of beer then left the scene as an ex-security guard was firing... read more