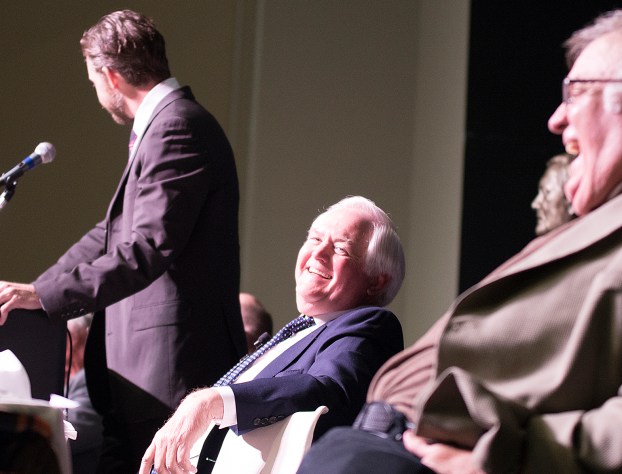 Highlights from Port Arthur News Homecoming Roasts of Wade Phillips and Jimmy Johnson are part of upcoming specials on the NFL Network and ESPN, respectively.
Clips from this past June’s roast of Phillips, defensive coordinator of the Super Bowl champion Denver Broncos, can be seen Wednesday night on an NFL Network special titled: “Worth the Wait: Gary Kubiak and the 2015 Denver Broncos.” It airs at 7 p.m.
NFL Films had a crew shooting video at the June 3 Phillips roast at the Bob Bowers Civic Center. Part of the footage that apparently will be shown involves what Phillips’ son Wesley, the Washington Redskins’ tight ends coach, said about his dad.
ESPN Films, meanwhile, is doing a documentary on Jerry Jones and Johnson that will air following the Southeastern Conference Championship game in December. An ESPN Films crew was in Port Arthur two weeks ago gathering hometown background material on Johnson at the Museum of the Gulf Coast.
Jim Maxfield, a teammate of Johnson when he played at TJ in 1960, was interviewed for the documentary. So was retired Port Arthur News sports editor Bob West. ESPN Films also obtained a copy of the 1993 Jimmy Johnson Roast video, in which Jones was a roaster, to use in the documentary.

BEAUMONT — The final score could have been Coastal Carolina 31, Lamar 14. Coastal, which had already scored 28 unanswered... read more