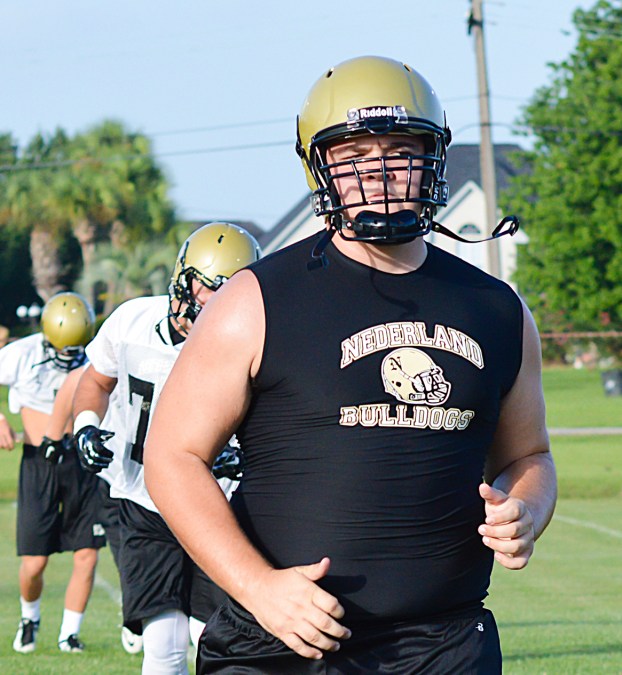 NEDERLAND — Nederland senior offensive lineman Corbin Smith was embarrassed this past Friday.
His Bulldogs had just lost 42-0 to West Orange-Stark, the first shutout of a Nederland team since Dayton defeated the Bulldogs 63-0 in 2007.
Smith knows there is only one way to make it all better this week, beat the Broncos this Friday night.
“You have to put last week behind you,” Smith said. “You have to get better from it. It really exposed our weaknesses and we have been trying to get better in those areas. We have to play well Friday to go into district with confidence. We were embarrassed. Nobody likes to lose by almost 50.”
So this week Smith was back doing what he always does each week, working as hard as he can for the next opponent.
The first thing anyone notices about Smith is his size. The Rice commit stands 6-5 and weighs 305 pounds.
What people do not see right off hand is how smart the young man is. He is in the Top 20 in his class at Nederland High School. His grades are just as important to him as football is. That is why he wanted to go to Rice, a school known for its academics.
“It’s hard juggling both athletics and academics,” Smith said. “You get home from practice you really don’t want to do all that homework. You have to find a way to manage your time.”
Nederland’s offensive line coach David Crommett finds it easy to give out compliments to the player he has coached for three years at the varsity level.
“His improvements since his sophomore year are night and day,” Crommett said. “What makes him special is he is a big guy and he is football smart. He is very coachable and he is aggressive. He is everything you would like to have if you could draw a lineman up.”
Nederland coach Larry Neumann feels the same way about Smith.
“It is going to be bad when he does graduate,” Neumann said. “Some people you start missing before the season is even over and he will be one of those guys. He has been a mainstay in our offensive line. He is a great example to our younger players and we will use that even after he is gone.
“He does all the right things. He has a bunch of football left in him and he will be proud of his efforts as time goes on. The nature of the game tends the shine the light brighter on those quote skill guys. I think Corbin is a skill guy in a different kind of way. He deserves the press and he has earned it.”
Smith is not worried about the press. He just loves the game of football and doing his job each week.
“We don’t get much from the press but it is from each other,” Smith said. “Our press comes from what your fellow player thinks about you. We can have four of our five doing right and that is a bad play. You have to work to make sure that guy next to you trusts you.”
•
Gabriel Pruett: 721-2436. Twitter: @PaNewsGabe

Southeast Texas has had no lack of water in recent months. We have had the most consistent summer rain in... read more