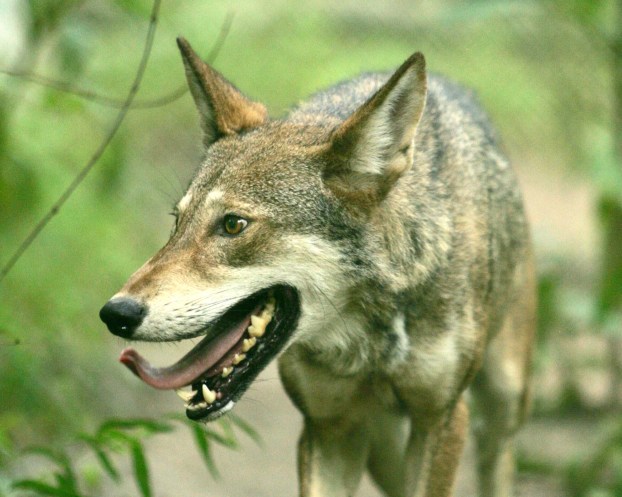 This red wolf from the federal captive breeding program has the classic long, lean look the species is known for. (Courtesy U.S. Fish and Wildlife Service)

It was a cold, rain day as I headed into the woods to check my game camera.

After rounding a corner of the trail, I stopped for a second to adjust the hood of my jacket when I saw it.

Lying in the broad open was what appeared to be a wolf.

Its coat was deep red and the head showed a prominent sagital crest, broad snout, highlighted by large ears. Its tail was long but not too bushy, and it had a white tip that matched the lining on the front of its legs.

Fewer than 40 yards separate us yet I wanted to move in closer. Slowly walking toward the animal without looking directly in its eyes, I closed the distance another 10 yards before it showed any signs of distress. Then it suddenly jumped to its feet and retreated with a gait only found in wolves.

What was it that I saw?

Canis rufus, the red wolf, was common in the southeastern United States from the Carolinas to central Texas. However, popular theory has it predator control programs combined with habitat loss in certain areas reduced the population and by the 1970s, United States Fish and Wildlife Service (Service) officials declared the only remaining red wolves were in eastern Texas and southwestern Louisiana.

The common thinking was the population threatened itself by interbreeding with the coyotes and domestic dogs.

In response to this, Service officials made canis rufus the first-ever mammal put on the endangered species list and started a capture program starting in 1973 to find the last remaining “genetically pure” red wolves and found a captive breeding program. In 1980, Service officials considered the red wolf extinct in the wild and labeled only 14 of the hundreds of animals they caught as pure red wolves. These 14 specimens are the basis for all of the red wolves in the federal recovery program.

More recent research suggests these animals is a fertile hybrid of the coyote and gray wolf. DNA analysis of 77 canids captured for the captive breeding program from 1976-76 (including some of the first animals in the captive breeding program) revealed only genotypes only found in southern coyotes or gray wolves. In fact, they even showed a grey wolf characteristic of the Mexican gray wolf, another highly endangered species.

Without question there are animals in Texas that look virtually exactly like the red wolves in the federal captive breeding program. Whether they are genetically the same is up for debate there are wild canines other than coyotes out there. The popular term for them is “coy wolves”.

Back in 2003 a landowner in Jefferson County called late one Friday evening and said he had been feeding coyotes on his property in hopes of killing them before he built a facility there. He feared the coyotes would cause problems around the tenant’s dogs and cats so he planned to eliminate them. The evening before he called me, he sat out with his rifle and watched as three wolves came up to the dog food he had put out to lure coyotes.

“I looked through my scope and immediately noticed them as red wolves because of the articles I had seen in the paper and the fact I have seen lots of coyotes and knew this was no coyote,” he said.

I rushed over to the spot, set out my motion sensing video camera and that evening captured nearly 30 minutes of video of a beautiful coy wolf eating dog food. The video is so long because the wolf can hear the camera running but cannot quite place the sound so it takes a bite, runs off, looks around and takes another bite. The video is quite humorous to watch and shows something that is definitely not pure coyote.

A study released this summer says that there is only one wolf species in North America and it is the gray wolf. All other animals are coyote hybrids.

Once again the debate over the red wolf continues. But one thing is not open for debate.

There are wild canines in Southeast Texas than look different than coyotes from our west and the big gray wolf from the north.

To contact Chester Moore, email chester@kingdomzoo.com. You can hear him on “Moore Outdoors” on Newstalk AM 560 KLVI or atwww.klvi.com.

ROCK-A-NOOS IMPROVE TO 6-3 ON SEASON

HUFFMAN — The Port Neches-Groves Rock-A-Noos improved to 6-3 on the young season with a 2-1 showing at the Huffman... read more