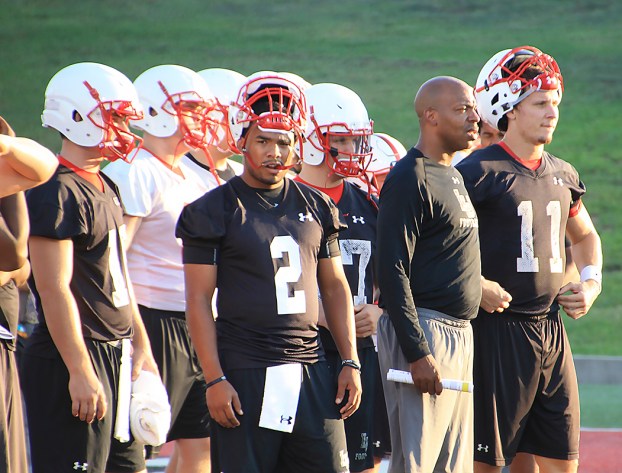 New name in the hat: Allen adds to list of Earp’s challengers at QB

BEAUMONT — Andrew Allen’s arrival at Lamar has not changed the quarterback race, the Cardinals’ coach at that position said.

But it won’t be argued that Allen has added a different dimension to the race.

He’s the only contender for the starting role with two years of Division I experience, let alone the only one who’s played in the Football Bowl Subdivision. The junior transfer from Texas City has logged his first two seasons at New Mexico State, taking on the likes of Louisiana-Lafayette and Texas State in the Sun Belt Conference.

“Just my experience of being on the playing field,” Allen said, is what he brings to the table in Beaumont. “There’s a lot of young guys here, and I just want to bring my experience to help this program the best I can.”

Returning starter Carson Earp, though, has been working out with the first string since preseason camp began Thursday, and Flanigan acknowledged that the senior, who transferred last year from Navarro Junior College, is further ahead than the other starting hopefuls because of his knowledge of the Lamar playbook.

“They threw everything at me so fast, I had no choice but to learn it and take in a lot of reps,” he said. “I don’t want to go out there and look clueless. I take pride in doing my job.”

The week leading up to Allen’s official arrival had been pretty interesting. He finished his final class at New Mexico State on Friday in order to be eligible to immediately play for Lamar, and his daughter Addison turned 10 months on Monday.

Addison is a big reason why Allen chose to transfer from the Las Cruces campus, where he had a breakout season with 1,529 passing yards and 16 touchdowns as a sophomore. He was 10 for 16 for 120 yards as a freshman.

Freshman Adam Morse, the recent Port Neches-Groves standout, is relying on Earp, among other Lamar lettermen, for help learning the Cardinals’ offense.

“It’s hard handling the new playbook, I’ll be honest with you,” Morse said. “But school and stuff, it’s not as bad as everyone says it is. It’s pretty much the same basic concepts, but learning the new terminology and stuff is the difficult part. The older guys know it like the back of their hands. They’re teaching me really well and taking me through it.”

Along with Clayton Turner, who transferred from the University of Miami in the spring, the quarterback pool at Lamar features three newcomers. Blake McKenzie, a redshirt junior whose ACL tear ended his preseason camp last August, is the only other returning player under center. Sophomore Brett Cox was ruled ineligible for the season because of academic reasons.

It remains to be seen if Earp can put together a full season of action, even if he doesn’t start all 11 games. He shared starts with Joe Minden last year and was the first-stringer when he was knocked out of the Oct. 1 game at Southeastern Louisiana with a collarbone injury.

“I think he was just beginning to develop and mature in this offense when he injured himself and he never was the same after that,” Lamar head coach Ray Woodard said. “He had a very good spring and summer, and I’m not going to say he’s going to be the quarterback to start the whole year, but he’s the guy to beat out. I think he deserves to come into the camp as the No. 1 quarterback. I think he’s earned that.”

Morse also is rebounding from a small stress fracture in his planting foot he sustained during summer workouts.

“I planted wrong on it in workouts,” Morse said. “I was out a few weeks. It wasn’t too much. It’s bothered me a little bit, but it’s not too bad. I can live with it.”

Earp threw for 576 yards and seven touchdowns in eight games last year. He is not allowing pressure to hit him during camp.

“If you put pressure on yourself, you’re probably not going to perform very well,” Earp said. “You got to go out there and be very confident in your abilities and what you can do and go out and play the game.”

The way Flanigan looks at it, the quarterback depth is a great situation.

Inika McPherson wasn’t too hard to spot when the United States athletes marched into Maracana Stadium during the Parade of... read more