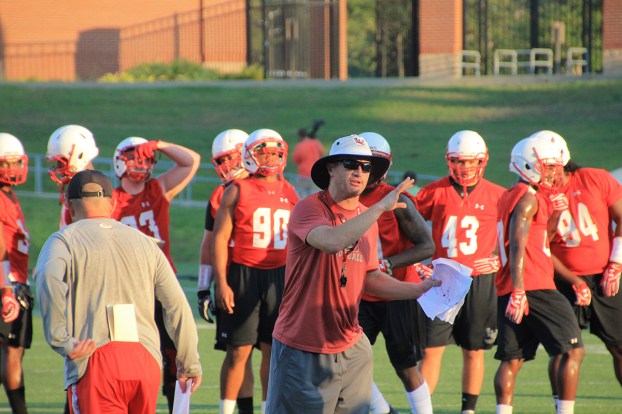 Usually, spring drills don’t answer all the questions about a football team going into preseason camp.

Some last-minute transactions, for lack of a better term in the college sector, always develop, changing the answers coaches though they had for August. And such is the case with the Lamar Cardinals.

The following five questions will help us examine what needs the Cardinals either have met or have to address as they dive into camp:

1. Is there a quarterback race?

Even before coach Ray Woodard announced at the start of Thursday’s camp opener that New Mexico State transfer Andrew Allen joined the Cardinals, the answer to this has been “yes”.

Carson Earp is the first-stringer just on record right now, but he has not put together a full 11-game season. Charge that to his injuries, not his performance.

Brett Cox was a freshman who was well behind in the quarterback race behind MBA graduate Joe Minden, Earp and Blake McKenzie before the latter’s injury in last year’s camp, but Cox had shown, by many accounts, the most improvement under center. We won’t see how much improved he is, however, because he did not make the grade to play this semester.

Clayton Turner has had the spring semester to acclimate to Lamar’s offense, and freshman Adam Morse of Port Neches-Groves could bring some competition to the table against a wealth of experience, but without pressure.

2. How much stronger are the lines?

The loss of Larance Hale at defensive end means one less first-teamer, but Manasseh Miles said he is 100 percent healthy after tearing multiple ligaments in his right knee against Baylor. He’s a defensive end, so there’s a hole the Cardinals already have plugged.

Tebo is a fourth-year Cardinal straight out of Liberty High and started in 10 games, making 44 tackles.

Offensively, Bret Treadway has been a monster at right guard. He and junior center Matt Oubre started all 11 games on the line as did now-graduate Justin Brock, and senior Dante Cattaneo, who made seven starts last year, are back to continue to open holes for running back Kade Harrington.

3. Who’s after Kade Harrington on the depth chart?

Lamar isn’t short-handed in this department. Maybe the question should be: Is anyone good enough to statistically replace Harrington on the field if need be?

It was hard to tell last year because Kade led the nation in rushing, and the Cards don’t want to have to find out until next spring.

4. Where will the greatest impact be made defensively?

Ask preseason All-Southland kick returner Rodney Randle and Miles, and both will tell you the impact begins on the defensive line. On paper, that should be the case this season.

Then again, the Cards will have to display all through August how well-oiled of a machine first-year coordinator Trey Haverty’s 4-2-5 setup is in Beaumont. Not only that, D-line coach Eric Roark’s first day of practice with Lamar was Thursday, and Willie Mack Garza is charged with helping Randle progress into an all-conference cornerback after spending the past season at Prairie View A&M. Ben Beasley moved up to linebackers after spending the past two years coaching the secondary.

Many of the players aren’t new, but the schemes are. So far, the players have reported no complaints.

Remember, Coastal Carolina is transitioning this year into the Football Bowl Subdivision after a short stint of dominance in the Football Championship Subdivision, so Lamar is welcoming a team that may offer more than 80 scholarships compared to the Cardinals’ 63, the FCS limit.

Only after Sept. 3 can we begin to ask if Lamar is strong enough to beat Houston. Or just win the Southland Conference.

I.C. Murrell can be reached at 721-2435 or at ic.murrell@panews.com. Twitter: @ICMurrellPANews