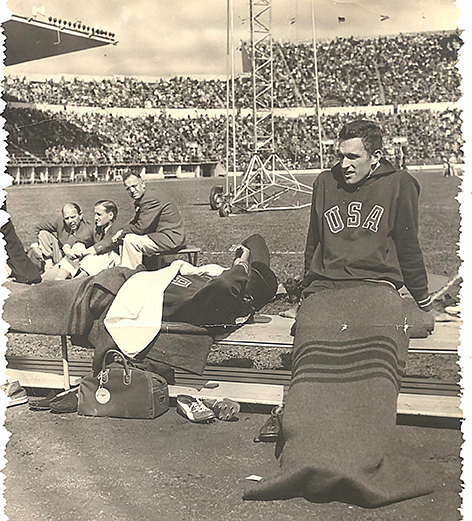 Buddy Davis stays warm during the high jump competition at the 1952 Summer Olympics in Helsinki, Finland. (Courtesy of Museum of the Gulf Coast)

THE LOCAL OLYMPIC MOVEMENT: One day in Helsinki

This is the third in a seven-part series on Olympic participants from Port Arthur. Sunday: Bubba Busceme

Buddy Davis’ athletic career was set.
The Nederland High graduate had just completed a standout basketball career at Texas A&M and was good enough to be drafted in the second round by the Philadelphia Warriors following his senior season in 1952.
He also was a newly crowned NCAA champion in the high jump and had just earned a spot on the U.S. Olympic team in that event.
There was just one caveat. He couldn’t sign with the Warriors right away if he wanted to go to Helsinki, Finland, for the Summer Games. To do so would have cost him his amateur status.
So, he settled for a $50-a-month job as a salesman for Phillips 66 following the Games.
•
The man born Walter Davis on Jan. 5, 1931, had been through a tougher situation as a child.
He was stricken with polio, which temporarily paralyzed both his legs and right arm.
“As far as polio is concerned, I was only 8 years old, so I was not aware of what was going on,” the now 85-year-old Groves resident said via email. “I just knew my mother was upset and I was being treated like a king. The torture part was having to wear those braces on my leg [and] stay in the bed at all times.”
Davis bounced back from the disease and learned how to strengthen his legs. It only helped him later in his athletic career.
He grew to be 6 feet, 8 inches by his senior year at Nederland, where he scored more than 60 percent of the Bulldogs’ points in basketball. He began to excel at the high jump, winning district and regional championships, but passed up on the state meet so he could play for the Bulldogs’ baseball team, which had just won the district title.
Texas A&M offered Davis a basketball scholarship, but freshmen in 1948 were not eligible for varsity competition, so he played on a freshman team.
In three varsity seasons (1949-52), Davis made two All-Southwest Conference and two All-District Six teams, and was third-team All-America in 1951 by the Helms Athletic Foundation.
“I was in ‘high cotton’ as basketball was concerned,’” Davis said.
But high jumping, Davis said, came easiest to him.
“I was the No. 2 high jumper on the track team, but we had a jumper on our track team that had the most beautiful form you had ever seen,” he said. “The only problem was he could only jump 6 feet high.”
Davis jumped 6-1 ½ to win his regional title in high school. It was a matter of getting down the right form to excel on the college level.
When Port Arthur-born Babe Didrikson Zaharias competed in the 1932 Los Angeles Games, she was penalized in the jump-off for going head-first, settling for silver. When Davis competed for Texas A&M, the “straddle” jump was common, but it didn’t help him place in the Southwest Conference meet as a sophomore.
So, he tried to copy the form of a teammate from Beaumont named Jim Dimmett. It led to him developing what Davis called “the Western roll.”
In the maneuver, the jumper initiates a “semi-dive” over the bar, curls over it with his hip and “rolls over” on the hip.
“You hit the sand in a three-point hit, your feet and one hand,” he said in a Jan. 10 article of The News. “On the takeoff, take your left foot and put it under the right hip.”
•
Davis first used the form in the Texas Relays. He won the event twice with a height of 6-9.
That was just the start of his high jump excellence on a national state.
He leapt 6-6 ½ to finish as NCAA runner-up in 1951 but came back to win the title at 6-9 the next year. That summer, Davis set an AAU record of 6-10 ½ in qualifying for the Olympics.
Davis broke the 7-foot barrier at the 1952 SWC championships, but the jump was lost “on mistake by SMU officials.”
The Olympic high jump was contested on July 20, 1952, in Helsinki. The conditions were nothing similar to a summer Texas day.
“It was cold and wet, and high jump took most of the day,” Davis said.
He was fortunate because a Texas A&M teammate had also qualified for the Olympics, “so I had someone to pal around with and not walk around with my mouth open-looking.”
Whatever could have remotely shell-shocked Davis in Helsinki, it didn’t seem to affect his performance.
Ken Wiesner, a 27-year-old U.S. Navy dentist who won an NCAA title at Marquette, and Davis, then 21, jumped perfectly through the 2.01-meter, or 6-foot-7, height. Davis, though, was the only contestant to clear 2.04 meters (6-8.32), to win gold. Wiesner took the silver.
•
Davis wasn’t done high jumping after Helsinki. He cleared 6-11 5/8 to set the last sub-7 foot world record in 1953.
That year, he began a career in the NBA that spanned five seasons, backing up Wilt Chamberlain. He averaged 4.8 points and 4.3 rebounds per game with the Warriors and St. Louis Hawks, winning a championship with each team.
The Golden State Warriors recognized Davis and other past champions with the franchise during their ring ceremony at the start of the NBA season last October. On Jan. 8, Davis was inducted into the Texas Track & Field Hall of Fame along with Olympic champs Carl Lewis, Sanya Richards-Ross and Jeremy Wariner.
What Davis knew about the Olympics as a kid, “you could put in a thimble,” he said. “I had no thoughts about the Olympics until that day at the Texas Relays in 1951 when I became the No. 1 jumper in the world.”
•
Sources: Museum of the Gulf Coast; Sports-Reference.com
•
I.C. Murrell: 721-2435. Twitter: @ICMurrellPANews

‘I am … LSU’: MHS’ Vincent plans to don purple and gold

For a minute-and-a-half, the anticipation only continued to build. That’s about the length of the online video Kary Vincent Jr.... read more