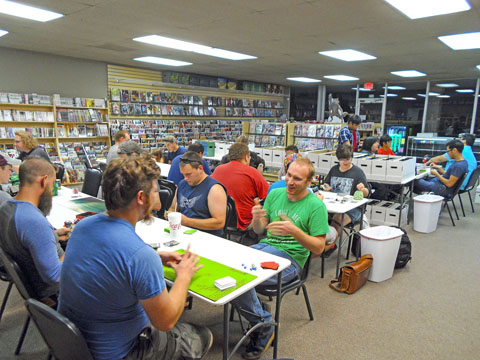 Card players engage each other in a Magic The Gathering tournament. (Lyons Den)

Comic book fandom for one and all

Catch up with your favorite superhero book or get ready to play out your latest round of Magic tournaments because Lyons Den is having its grand opening at its Nederland location.

Lyons Den is a hobby store that specializes in comic books, collectibles, board games, and playing cards. But, if you were to listen to its co-owner, the specialty shop also offers a strong sense of community.

“What we offer is fellowship,” Kelly Lyons, co-owner and worker at Lyons Den, said. “A lot of community people come together here as a group—we offer a lot of gaming services that people have to play with other human beings.”

Face-to-face interactions are only one of the values to be had at the store, however, as Lyons would be quick to point out.

“If you’re a comic book guy, we’re going to give you the best service. We give the best discount offers for comic books—free subscriptions, 10 percent off the cover price. We even bag and board the books for you.”

And keeping in line with the community flair of his and his brother’s (Leonard) store, Kelly Lyons likes to treat public events as an opportunity to grow, connect, and just have some fun.

“I run the major comic events here like it’s a mini-convention,” Lyons said. “We host family-oriented events. We have cosplayers. We give stuff out for free. As a teacher, I love to give kids stuff to read.”

In his enthusiasm, Lyons would name notable events like Free Comic Book Day and ComicFest—events geared towards raising awareness of comics to the public and, of course, to give out free books—as opportunities for their store to grow and become a part of the community.

Lyons noted that literally thousands of comic books were given away on those days, and he looks to duplicate that kind of publicity with their grand opening in Nederland.

“We’re giving out seven #1 comic books of different titles to the first 150 people that walk into our store,” he said.

And the names of some of those titles should be familiar to anyone who’s watched a Marvel film recently—Captain America, Thor, Invincible Iron Man, and Totally Awesome Hulk.

Thanks to the Lyons brothers’ first store in Vidor doing well, they were convinced that opening a second one “would open up more business and open up new growth and provide a business to the community that no one else was serving.”

Lyons would cite their location in Nederland near FM 365 as a good location to open their second shop because “365 is the heart of Mid County. It borders Nederland, Port Arthur, and Port Neches; and it’s right in the middle of everything.”

The store’s breezy storefront on 918 S. 27th St would seem to confirm Lyons’ belief of that neighborly junction, as it’s located right across the street from an elementary school and the popular Doornbos Park. And, come Saturday, that local junction will be populated by comic book readers galore.

“Comic books will never disappear,” Lyons said. “People want art in their hands. Art held in the hand is going to be different from digital art—it’s tangible.”

Lyons Den’s grand opening is on Saturday, July 23, from noon to 4 p.m. It will host, among other things, door prizes, cosplayers, and free comic books.

A strong show of solidarity by Southeast Texans was displayed on Friday as a prayer vigil was held for Nederland... read more