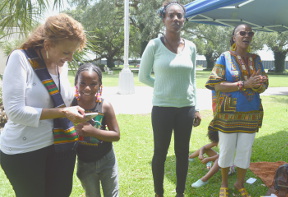 Under a canopy of ancient oaks a symbolic red, white and blue flag was unfurled Tuesday against a powder blue sky while the word “freedom” danced from the lips of those whose forefathers had lived a life of slavery.

In celebration the holiday that commemorates the announcement of slavery in Texas in June 1865, the Juneteenth National Flag raising ceremony at the Jefferson County Subcourthouse in Port Arthur served as a kick off ceremony for a weeklong celebration of the holiday.

“This is a very special celebration for us,” Gail Pelham, president of Port Arthur’s African American Cultural Society, said.

“Texas was supposed to be the last state told about the emancipation,” Pelham said while noting it should not be forgotten that 150,000 people fighting the Civil War lost their lives.

“My great grandmother said she was not a slave, but her mother was. We are not that far removed from slavery, and we still have some things to fight for,” Pelham said.

And, the group has another mission: to educate youth about their heritage.

This month children are being be introduced to books and literature about slavery and the hard-won freedom of their ancestors.

“Juneteenth is a continuing struggle of liberation and higher life,” Judge Marc DeRoeun, Precinct 2 Justice of the Peace, said while reading a proclamation issued by Jefferson County in honor of Juneteenth.

On Saturday, Juneteenth activities continue with the Ms. Juneteenth Cultural Pageant and Mr. Juneteenth Extravaganza. The pageant is scheduled for 5 p.m. at the Jefferson County Park, 444 Fourth St.

This year nine girls ages 4 to 17 and five boys ages 12 to 17 are vying for the respective Juneteenth titles.

This year’s Juneteenth Parade is scheduled for 6 p.m. Sunday at Stilwell and Procter streets, with lineup up an hour earlier at 5 p.m.

Because the parade falls on Father’s Day, all fathers are urged to come out and be part of the parade festivities.