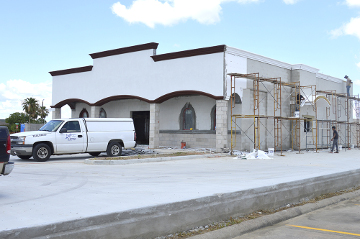 If all goes as planned, a retail shopping center along the U.S. 69 business corridor that has been in development for more than a decade should be completely full in the coming months with the addition of national restaurants and retailers.

At the same time, a local restaurant owner is building a second eatery just off U.S. 69, or Memorial Drive as the locals call it.

Kerry LaGrone, a former Groves resident who now lives in Spring, began developing Port Plaza Centre in 2005 with a vision of bringing additional retailers to the city in an area that had become the business hub of the city.

Right away, LaGrone’s plans were stalled when Hurricane Rita devastated the area that same year.

“It was certainly not the normal path or the path we had anticipated,” LaGrone said.

Since then, the shopping center has filled with a variety of retailers such as Boot Barn, Conn’s, Hangar Prosthetics, Sertino’s Café, TJ’s Restaurant, Cheddars Restaurant, Saltgrass Steakhouse, the Marriott Hotel and Golden Triangle Emergency Center.

LaGrone is now in the final negotiation stages of inking a lease deal with two national restaurants. LaGrone said he is not ready to release the new businesses’ names, but believes he will be ready to announce within the next 90 days.

“What we are doing is hoping to finish up that shopping center. If these establishments go in as planned we will be completely full and occupied,” LaGrone said.

The two restaurants will be built on two pads adjacent to Saltgrass.

LaGrone said he has had success with the location because Port Arthur is well known as a thriving retail market.

“We are seeing a lot of activity and interest. I really believe it is due to our efforts nationally to bring people to Port Arthur,” he said. “Port Arthur is on the national map.”

On a more regional level, Antonio Ceja, owner of Tequila’s Restaurant on Memorial Drive, is building a second restaurant off Jimmy Johnson Blvd. adjacent to The Waffle House.

The new restaurant, called Kimmy’s Café, will have a different format from Tequila’s.

A lot of the same Mexican food served at Tequila’s will be offered, along with other food items such as sandwiches, salads, coffee and juices.

Kimmy’s Café will be open for breakfast, lunch and dinner, and will have expanded hours on the weekend, possibly 24 hours, Ceja said.

The café will cater to people wanting to get something quick to eat.

“It will be faster, there will be somebody in line to fix someone’s order right away,” Ceja said.

The café is expected to open late summer, or early fall.

In addition to Tequila’s at the Memorial location, Ceja is owner of Tequila’s in Bridge City and another restaurant in Lake Charles. His sister leases the Bridge City Tequila’s.

The new business, named after Ceja’s daughter, will be family owned and operated.