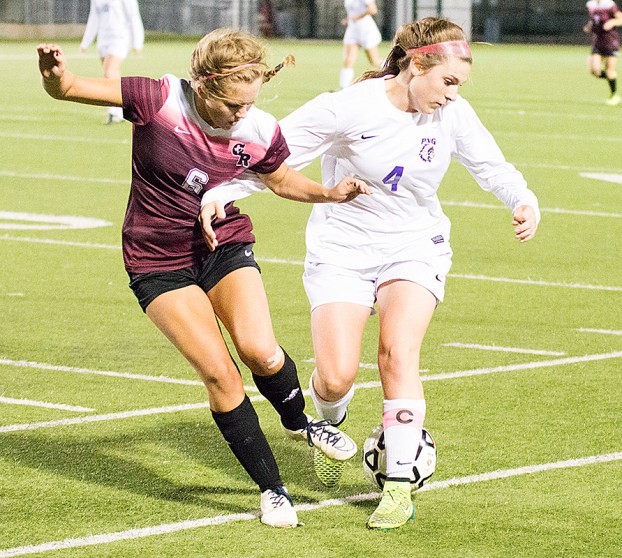 BAYTOWN — Libbie LeJeune and the Port Neches-Groves Lady Indians turned their fortunes in dealing with penalty kicks around in a playoff match Friday.

LeJeune blocked two penalty kicks in the shootout as the Lady Indians defeated the George Ranch Lady Longhorns 0-0 (4-2). The PN-G boys lost their playoff game earlier in the evening at Stallworth Stadium.

The Lady Indians and Lady Longhorns were tied 0-0 after regulation.

LeJeune played out of her mind for the entire night and finished with 12 saves on the night, including the two in the shootout.

“She is a beast,” PN-G coach Aimee Bates said of her keeper. “She has gotten better after each match. It is so awesome to see because this is her first year in goal.”

LeJeune admitted Friday night was the best match she has played all season.

“The first one I let in during the shootout, I knew I could not let anymore in,” LeJeune said. “I knew it could mean the end to our season.”

LeJeune did let one more get through but it did not end the Lady Indians’ season.

That is because PN-G did not miss in the shootout.

The score was sitting at 3-2 when sophomore Atalia Garcia took her spot in front of the George Ranch keeper, Michelle Mills.

Garcia fired the ball into the back of the net and sent the Lady Indians into the third round.

“I am so proud of each teammate,” LeJeune said. “Each of us plays a special role on this team. I am super excited. I can’t wait to see what the future holds for us.”

NEDERLAND — Keith Barrow and his Nederland Lady Bulldogs know they are in for a dogfight tonight, even if their... read more