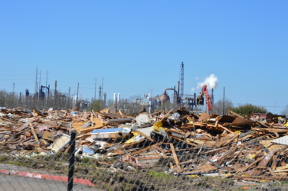 Larges mounds of demolished building materials are all that are left of Port Arthur’s first public housing complex, Carver Terrace.

Going on a month after demolition work started at the vacant Carver Terrace Apartments, the bulk of the building materials from the one-time low income apartments on the city’s West side remain in mountainous heap — a bittersweet reminder of the city’s first housing project now reduced to a pile of rubble.

Built in the 1950’s, Carver Terrace was home to many Port Arthur residents in need of financial assistance. But, the location — in the shadow of refineries — prompted U.S. Housing and Urban Development Agency officials to decide the facility should not be rebuilt at the same location following significant hurricane damage.

“It is indeed bittersweet for a lot of the residents who lived there through the years, “ Port Arthur Housing Authority Board President Clonie Ambroise said.

Carver Terrace residents were moved out and given HUD vouchers to allow them to move elsewhere. It’s been more than a year since the apartments were fully vacant, and during that time not only was the abandoned 8-acre site an eyesore, the vacant buildings because a safety issue with fires and squatters taking up residence.

“It is a great day now that it is down,” Ambroise said.

Not everyone is pleased with the demolition process so far.

Those heaps of trash are concerning former City Councilman John Beard, who is filing complaints with the city, the Southeast Texas Regional Planning Commission, the Port Arthur Housing Authority and to HUD.

“It does not make sense to have all these man-made fibers lying around,” Beard said.

Since the demolition started, Beard said little of the materials have been hauled off, and what has is carted away in an uncovered truck with debris flying out into the air.

Of particular interest is fiberglass material, which can be linked to cancer, Beard said.

“Improper demolition and handling of the insulation laced debris, left exposed to the air, is hazardous to the public health and welfare of the surrounding community,” Beard said. “This willful exposure compromises the wellbeing and safety of persons nearby, many of whom have compromised health.”

Senior citizens and families with school age children in the vicinity of the demolition site already suffer from respiratory disease and distress, as well as other related illnesses, Beard said.

Cele Quesada, director of the Port Arthur Housing Authority, said nearby residents should not be worried, and that the demolition process is following state and federal regulations.

“We have taken all the due-diligence precautions,” Quesada said “We’ve had lead and asbestos assessments that we were required to do.”

Local contractor ICON Builders was hired to perform the demolition, which was part of the redevelopment of Carver Terrace.

Instead of rebuilding Carver Terrace, HUD funded another housing project off of FM 365. Park Central has already started leasing and is expected to be fully occupied when fully completed in May.

Of the Park Central re-development funding for Carver Terrace, $564,857 was dedicated to the Carver Terrace demo project. Adjacent Lincoln Square apartments will also be torn down as part of the demolition.

Chris Akbari, president of The Itex Group, which owns ICON Builders, said the company subcontracted the demo job to Total Safety, a Port Arthur business located on FM 365 in the old Sitel Building.

Akbari said the demolition process is progressing on schedule, and should not pose a health risk.

After the tear down, contractors begin the hauling off process, which is done in stages.

For example, because concrete can be re-used, workers will sift through the rubble and haul the concrete to a salvage company.

“Certain materials can go to certain places, and certain others cannot,” Akbari said.

Additionally, Total Safety workers certified for all environmental requirements and there is an air quality monitor on site.

“We hired Total Safety to make sure everything is done properly and we believe it is,” Akbari said.

When completed, Port Arthur’s Housing Authority is required to maintain the eight-acre site where Carver Terrace and Lincoln Place once stood.

“HUD is requiring we maintain it as a green area and that we fence it. They are not allowing us to do any kind of activities,” Quesada said.

Once the site is all cleaned up and a 6-foot hurricane fence is erected, the Housing Authority plans to put up a historical sign to commemorate the city’s first public housing.

“We plan to pay tribute to the history of the place, but we are glad to have moved on and are finally at a place that has been taken care of,” Quesada said. “We have fought it down to the end, and it has recently gotten bad with fires and vagrants, so it is good to have finally been taken down.”