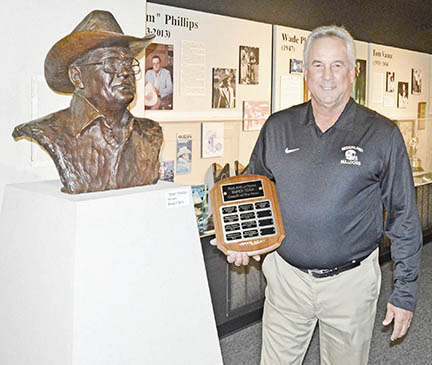 Neumann named Coach of the Year

Larry Neumann is a gracious man.
He was humbled to be named the Port Arthur News Super Team Coach of the Year. Then, he showed the type of man he really is on the inside.
“If Larry Neumann was picking Coach of the Year, Cornel Thompson is the Coach of the Year,” Neumann said. “That is not to minimize this honor. I am so proud of West Orange-Stark. I would just be remiss if I did not say Cornel Thompson is the true Coach of the Year in my mind.
“It is very humbling to be singled out for this award. Any coach would tell you it is a reflection on his players and his coaching staff. Two people on a football team always seem to get too much credit and take too much blame and that is the coach and quarterback. This really is in honor of our players, coaches and our fans.”
Neumann and his Bulldogs went 8-4 in 2015 and won a share of the District 22-5A championship along with Port Neches-Groves.
Nederland went two rounds deep and lost to eventual Class 5A Division I state champion George Ranch, which dominated the state championship game in a 56-0 win over Lake Ridge.
“I was at the game and said ‘George Ranch had to beat Nederland to win the title,’” Neumann added.
This was a year the Bulldogs were not predicted to do much. The Bulldogs proved people wrong through the 22-5A stretch.
“I think our players put that chip on their shoulder for whatever reason,” Neumann said. “They let that be a motivating factor. We had tremendous leadership this season and a next-man-up mentality. You have got to have that chemistry, and that is not something you can coach. That trust in your teammate leads to not wanting to let your fellow teammates down.
“That is what happened with this football team. I am so proud to have been associated with them. This was a very enjoyable season.”

Trey Rembert was a special player for Brandon Faircloth and the Port Neches-Groves Indians, the main reason being Rembert started... read more