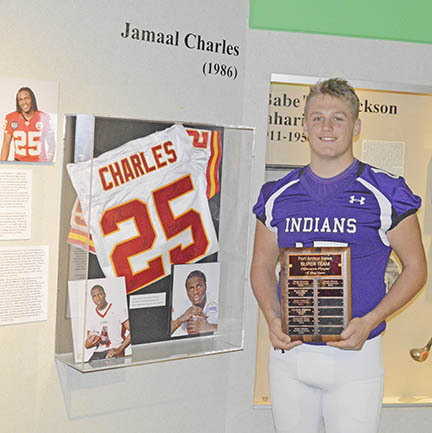 Port Neches-Groves quarterback Adam Morse led the Indians to a share of the District 22-5A championship in 2015. (Gabriel Pruett/The News)

Adam Morse had a lot of fun playing quarterback over the last two seasons at Port Neches-Groves High School.
The future Lamar Cardinal also put up great numbers as the Indians signal caller.
This past season was no different and for his efforts he has been named the Port Arthur News Super Team Offensive Player of the Year.
Morse threw for 2,789 yards on 204-of-310 passing with 36 touchdowns.
He guided the Indians to a share of the District 22-5A championship. Angleton eliminated PN-G in the second round of the playoffs.
Morse is the first back-to-back winner of the Offensive Player of the year since Dustin Long won the award in both 1998 and 1999.
“It is a big honor,” Morse said. “I win it back-to-back just like my idol growing up. I always tried to do the things he did when he was quarterbacking PN-G. I knew I wanted to be as good as he was. The one thing I didn’t do was go to the state championship game but that is a very hard thing to do.”
Morse and the Indians accomplished a lot in 2015. The Indians went 9-3 and won a playoff game for the first time since 2010.
“This year was great,” Morse said. “I really still think we should have beat Nederland and won the district title ourselves but there is still a new number on the wall and it will be there forever.
“I had a blast over the last four years. I loved all my coaches and teammates. It was a great experience and not many people get the chance to play football at PN-G. There is a lot of honor. There is a lot of pride. There is a lot of tradition.”
Morse’s career now might intertwine with his past Bulldogs foes when he joins the Cardinals. Nederland players Justin Carr and Austin Krautz are also committed to Lamar along with PN-G defensive lineman Christian Langston and receiver Caisen Sullivan.
“I am so excited words can’t really describe it,” Morse said. “It is going to be a challenge getting to know players I have not played football with my whole life. It is going to be interesting making a connection with those guys.”

Neumann named Coach of the Year

Larry Neumann is a gracious man. He was humbled to be named the Port Arthur News Super Team Coach of... read more