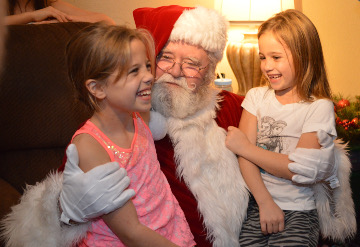 BEAUXART GARDENS — Sharon and Gary Neil’s Beauxart Gardens home is decked out for the holidays with colorful lights, decorations and presents under the tree.

But Christmas is a bittersweet time for the Neil’s. December 25 would have been the 30th birthday of their daughter, Allison Neil Clark, who was shot to death in 2010. The murder remains unsolved but police are steadfast they will bring justice to the family.

The officers and Santa were met with hugs and excited chatter from the group of girls.

Once inside, Santa found a seat as the sister’s dove into the bags of toys. An Easy Bake Oven elicited squeals of delight; a Star Wars toy played the theme song of the popular movie and toys from Monster High and Frozen were equally inviting. 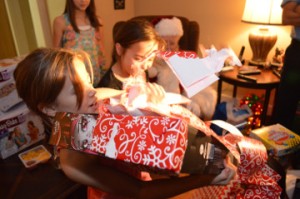 Sharon Neil stood near the back of the living room as her granddaughters ripped through the Christmas wrapping paper taking delight in their excitement. The officers, who are still investigating the murder case, smile and offer assistance from time to time. Josh Clark, the husband of Allison and father of the two little girls, stands with the officers, a smile on his face.

“We got so many presents,” Cadence Clark said while taking a quick break from opening gifts.

When asked what she will do with all the new toys, she answered, “we’ll probably play with them all night.” 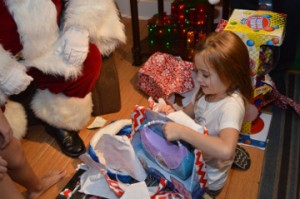 Sharon Neil and family members work to keep Allison’s memory alive. On May 14, 2010, Cadence Clark was a toddler asleep in her car seat as her mother drove the family’s Ford Excursion down West Port Arthur Road to Walmart to buy diapers and a gift for a niece. A bullet penetrated the SUV’s window hitting the young mother in the chest. She was able to bring the vehicle to a stop and put her hazard lights on before she died. A passing motorist, who is also a neighbor of her parents, found her. The younger child was with her father at home at the time of the incident.

Corey Neil, Allison’s brother, said photos are another way they work to keep the memory alive and let the girls know who their mother was.

Josh Clark is still trying to deal with the loss of his wife and mother of his children.

“They say it gets better in time but it’s not that it gets better, you just think about it less often,” Josh Clark said. The deep grief tapered to maybe every other day, then once a week. “Now I have a hard time once every other month.”

His voice softened as he spoke about his daughters. A nighttime ritual, after the murder, was to tell each girl he loved them, would protect them and would always be in their heart. He would then recite the words again this time saying inserting the word “mother.”

“Cadence acts just like her,” he said. “MaKayla, there’s a picture of Allison at the same age, it’s almost the spitting image except she has a mix of our eyes.”

Police are also working to keep Allison’s memory alive as they continue to work the case.

“Investigators have worked so hard to solve this case,” PAPD Maj. Raymond Clark, who is no relation, said. “This case sticks in our minds. It’s especially brutal, especially random. It’s always there with us. We will solve this case.” 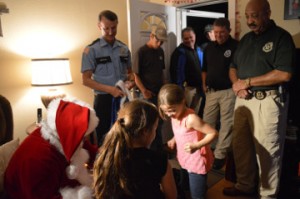 PAPD Officer Mike Hebert explained why Blue Santa and the officers visited the family’s home. The officers, who are husbands and fathers themselves, wanted to give gifts to the two motherless girls but also send a reminder to the public the case is unsolved.

“We came here because we wanted to make sure to keep Allison’s memory alive. We always say Allison’s death could have been our mother, our wife, our sister,” Hebert said. “People need to realize Allison’s a part of all of us. It (her murder) was such a random act of violence and it could have happened to anybody. Unfortunately it happened to this family.”

Hebert said investigators have never stopped working on the case, following every lead as they work toward justice for the family.

“We have been following leads and over the last year we have traveled as far as Texarkana, Texas,” Hebert said.

The case went cold after about two years but then police got new leads in the case. The hope now, as media focuses once again on the case and of the family devastated by the murder, is to reach someone who may know what happened that night.

“Maybe that one person can break the case,” he added.

Last minute shoppers flocked to local stores Thursday. Some were there to pick up last minute gifts while others... read more